Norman may be a good ways away from the Bermuda Triangle, however, that does not mean things won't disappear.

After being touted by some as the saviour of the defensive line, Quincy Russell no longer appears on the roster. The 6-4, 310 pound transfer from Trinity Valley Community College (Texas) announced Monday that it was "time to find a new home." 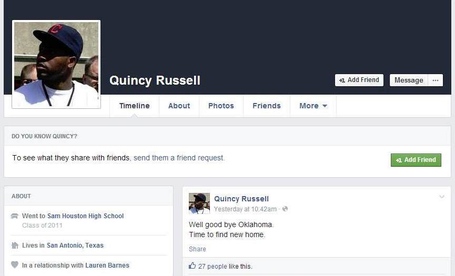 Russell claims to have been kicked off the team while citing the notion a coach proclaimed him "a cancer to the team." When approached about the situation, Head Coach Bob Stoops had this to say.

Stoops on Quincy Russell: "He was not able to do the things everyone else was doing, and that's not gonna work." #Sooners

Now, a quick look at the roster reveals that not only is Quincy Russell's name missing but also that Frank Shannon is nowhere to be found either. Part of why may the fact that the Oklahoma Supreme Court upheld the one-year suspension being enforced by the university.

I'd make the case that Shannon being stricken from the roster should come as no surprise as Joe Mixon, also sitting out due to a suspension, has been nixed from the roster as well.