There was more to Perine's touchdown run than just running over people.

The Oklahoma Sooners used their rushing attack to pound the Louisiana Tech Bulldogs into submission last Saturday night and Samaje Perine's 7-yard touchdown run in the fourth quarter is a perfect example of it. The Sooners used their big and powerful (yes, I know that sounds cliche') offensive line to move the Bulldogs' frontline backwards and then a combination of zone-read and misdirection to freeze the linebackers and secondary. Let's take a look at this play and then and then we'll discuss what all we see.

Once again there's much more to this play than just power. Don't get me wrong here. Power is most definitely what made it work but did you see the misdirection and the seal block by the tight end Taylor McNamera? What about the read that Trevor Knight made and his other options on the play? 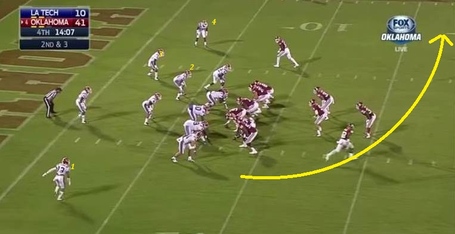 The key to pulling off a good magic trick is to distract with one hand while you use your other to work the "magic." The audience doesn't really see what's going on because of this distraction. Derrick Woods (#12) is the distraction on this play. By going in motion he gets four of LA Tech's defenders to take notice of him.

1) The corner, Le'Vander Liggins (#13), who was over Woods will now move closer to the line of scrimmage and take a run support responsibility. He's not real good at this as we'll see here in a minute.

2) The left-side linebacker (to Knight's right) now either has the responsibility to cover the flat of the deep third on a pass in addition to his run responsibility.

3) The strong safety will have the opposite coverage of the outside linebacker, most likely the deep third, but also must account for the swing pass or the option in which his guy would be the pitch man (Woods) while the linebacker would have the quarterback.

4) Finally we have the field side corner who's primary role is to cover his man on the pass but now has to be thinking about a potential run or swing pass and prepare himself to fend off a block.

The important thing to notice about all four of these defenders is that not a single one of them will be in on this play. 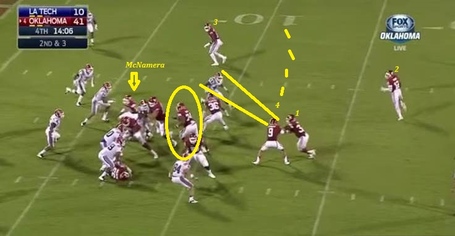 Now for what's really going on...and there's a whole lot going on just after the snap. This is a zone-read play where Trevor Knight has four options at his disposal. It's all based off what the defensive end/linebacker does and you can see Knight looking (reading) the end as he puts the ball in Perine's gut. From here he has four options.

1) He can let Perine keep the ball and run straight ahead.

2) He can hit Woods on a flat pass or wheel route. (I believe this would have been a score as well)

3) He can hit the field side receiver on an out or fade route. Notice that both receivers are looking back to see what Knight decides to do.

4) He can keep the ball on either a bootleg or an option run.

Knight decides to let Perine keep the ball and Adam Shead is a key reason why. Tight end Taylor McNamera has come across the field, from the right side, and has his sights on taking out the linebacker to completely seal off the right side of the defense (offense's left) and there's Big Ol' Adam Shead (6-4/339) free in the middle and ready to smash whoever steps up in the hole. 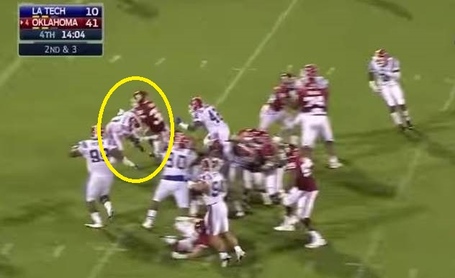 Perine is engaged by a defender for the very first time at the four yard line. That's three yards for Oklahoma's 5-11/243 bowling ball to get a head of steam. The defender who hits him is Lloyd Grogan (6-1/211) and he makes the mistake of hitting Perine up high instead of trying to cut him down at the legs. This won't end well for Grogan. The linebacker that Knight was reading (#42) Tony Johnson is in pursuit and is about to get a ride into the end zone on Perine's back. 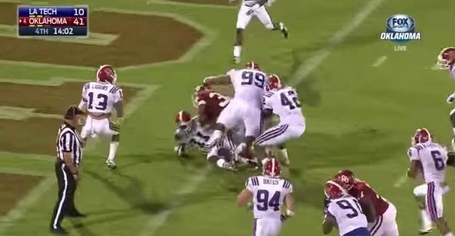 The end result is Grogan on his back, Perine in the end zone, and two Bulldog defenders getting taken for a ride. Malcolm Pichon (#99) jumps in there at the end for good measure.

Oh, and remember our friend #13 Le'Vander Liggins. Go back and watch just him one more time. He wants no part of this play.

An effective power rushing attack is much more than just lining up and hitting the guy in front of you. It takes multiple components to really make it work, and it appears that the Sooners are on the right track for that. The key is going to be how they handle the bigger defensive lines of Tennessee and the Big XII. You gotta like their chances though.