Share All sharing options for: Anatomy Of A Play | Why Knight Was So Wide Open On The Reverse Pass

You have to appreciate the fun that Josh Heupel is having as Oklahoma's play caller this season. First it was a flea-flicker against Tulsa and now a reverse pass against West Virginia. While the former didn't result in anything spectacular, the latter resulted in a game-tying touchdown. Why the different results? Let's take a look at  the reverse pass from Saturday night.

The obvious answer to the question of why this play was so successful is that there was a blown defensive assignment. Let's look at the still frames, of the play, and point out the same thing West Virginia's defensive coaches were most likely pointing out to their players during their film session. 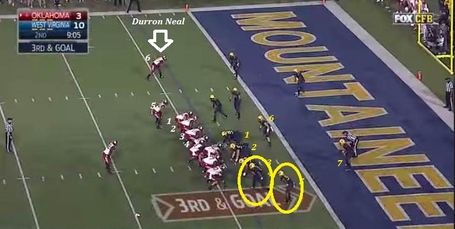 This is an interesting defensive alignment for West Virginia. Oklahoma is off balanced to their left with Durron Neal at the top. The Mountaineers are also off balanced to their left seven defenders. Notice that the top corner is lined up inside of Neal, as he should be, but he's looking into Oklahoma's backfield along with the entire right side of the defense. The Mountaineers are expecting run all the way here and they're expecting to to go to Oklahoma's right.

The keys for Oklahoma's success on this play are the two circled defenders, linebacker Brandon Golson (#2) and cornerback Ishmeal Banks (#34) 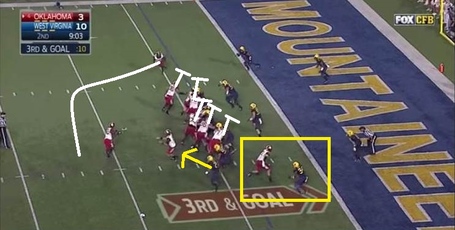 Banks drops into coverage on tight end Blake Bell which removes him from the bottom of the line and pulls him into the end zone. The entire offensive line blocks to the left and the pitch to Samaje Perine goes left as well. Naturally the defense flows that direction in pursuit, despite the fact that Neal is coming end around. Golson is crashing hard and has backside containment. This will put him in position to make a tackle for loss except for one thing. 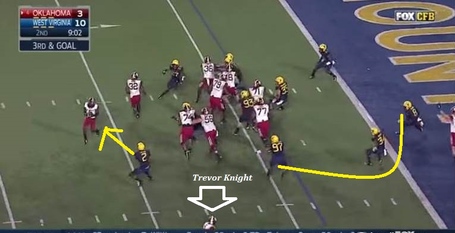 West Virginia does an excellent job at backside containment here. They have four defenders unblocked and are led by Golson who has a bead on Neal and is about to make that tackle. However, that one thing that was wrong here is that no one picked up Trevor Knight, including Golson who ran right by him. Yup there are four defenders in place here and each one of them has their back turned to Knight. 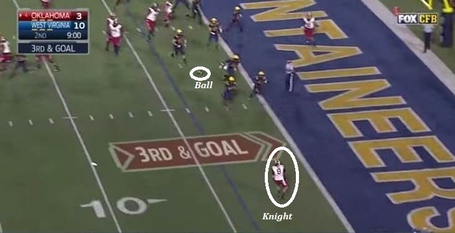 Here's a perfect example of how not to play fundamental defense. These plays are designed to do just what Oklahoma did to the WVU defense. The Mountaineers were out of position early, over pursued during, and were completely lost late in the play. Not a single defender knows where Knight is until Neal puts the ball in the air. Knight was so wide open on the play that Neal just had to float the ball in the general direction.

With this play Knight has now thrown for, ran for, and caught a touchdown this season.