Sterling Shepard's touchdown on Oklahoma's second drive of the game was a combination of talent, a personnel mismatch, and bad fundamentals.

You get the feeling that touchdown catches by junior receiver Sterling Shepard are going to become the norm in Oklahoma football. The 5-10/195 receiver from Oklahoma City caught his 11th touchdown as a Sooner on Saturday night and while everyone in the stadium saw the catch and celebration they may not have seen everything that made it happen. Take a look.

Did you see it? Did you notice the isolation coverage? Did you see the safety blitzing? What about the corner who was too slow to turn his hips? Oh yeah, it was a lot more than just a throw and catch that made that play happen. 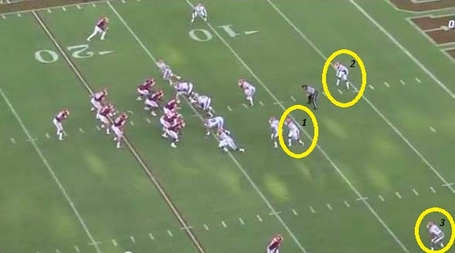 This play was a pre-snap read all the way. You can confirm this by the way Trevor Knight immediately turns his shoulders and makes the throw at the snap. There were three things that Knight saw before the ball was snapped that set this play up.

1) Louisiana Tech is playing a 5-2 defense which means there are five down linemen and two linebackers. However, Knight sees an eighth guy up there. In typical Manny Diaz fashion the Bulldogs are going to blitz on this play and that eight guy is safety Xavier Woods (#7). Because Oklahoma is in the Diamond formation, this is most likely a run blitz. Regardless it is going to cost LA Tech.

2) The second thing Knight does is find the other safety, and that won't be hard at all. He's lined up directly over the ball, on the left hash. This removes the top receiver, Durron Neal, from the play because he is on the narrow side of the field. His only real shot at a pass is to run a short curl. There's no room for a fade to the corner pylon and the position of the safety removes the threat of the slant or post route.

3) This brings us to the third thing that Knight sees and I bet his eyes lit up when he noticed it. There's Sterling Shepard at the bottom of the screen with one-on-one coverage on the wide side of the field. A quick slant would work here as well but the best shot at a score is the fade. This is a touch pass that quarterbacks practice hundreds of times. 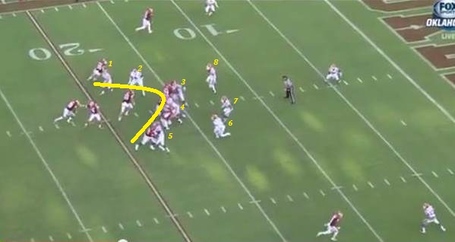 Louisiana Tech has eight guys committed to Oklahoma's backfield on this play and yet Trevor Knight gets a perfect pocket to throw from. This results from two things. 1) Great blocking by the offensive line. 2) Running back assignments from the linebackers and safety. The movement to the left by OU's running backs freezes the two linebackers but Xavier Woods is coming. Knight doesn't care about any of this though because he has more than enough time to turn and release the ball towards the back corner of the end zone.

The other thing to notice here is that Tech cornerback Bryson Abraham (#15) should have already turned his hips towards Shepard. Instead he's still lined up facing Knight and the offensive backfield and this is why he gets beaten on the play. The second Knight squared to throw he should have turned to run with Shepard. Knight and Shepard both already know where the ball is going and at them moment Bryson discovers it he'll have his back completely turned to Shepard and won't get the opportunity to recover. This is both bad recognition and bad fundamentals at play.

By the time Abraham recognizes what's going on it's too late. He's turned to find Shepard as the Sooner wide out is already looking back at the ball. So what you've got here is the defender just finding the offensive player as he's looking back at the ball. There's no way that Abraham knows where the ball is. Because he doesn't know where the ball is, he also doesn't know that the play is going to take them to the back pylon. All Shepard has to do is keep running in a straight line. Abraham, on the other hand, will have to adjust his angle again.

Look at how much separation that last angle adjustment by Abraham caused. Shepard is about to raise his hands to make the catch and Abraham still has no idea where the ball is.

What makes this play so great (outside of the seven points) is that LA Tech has three defensive backs against two Oklahoma receivers and they still get burned. You could make the case that they blitzed from the wrong side because the top was the narrow side and the boundary serves as an additional defender. If the corner lines up to the inside of Neal (at the top) then he still has the ability to take away the slant and post routes and the boundary will help him against the fade. They really don't need a safety on that side. However, because they blitzed from the wide side of the field Abraham had to line up slightly to the inside of Shepard and had no over the top help for the wide area he has to cover. This puts him in a very poor position to cover the fade. The certainly needed a safety to be deep on that side of the field. This play was a touchdown waiting to happen before the ball was even snapped.