Meanwhile, around the conference….

The Big XII Conference acquitted itself in victories and defeats this first week of the 2014 season. Given that us Sooners are lucky enough to play in a conference in which each team is represented by its own SBNation fansite, I thought it meet and proper to look to these fan communities and recap from there.

Share All sharing options for: Meanwhile, around the conference….

NORTH DAKOTA STATE 34, IOWA STATE 14. The conference saved the worst for first.  Cyclones fans must have been crestfallen to see their team jump out to a fourteen point lead and go on to lose by twenty.  Let’s not ignore history, NDSU has proven that it’s not your typical FCS team, but it certainly stung the ISU faithful to not only lose, but also to see star players like Tom Farniok go down with injury.  The game did provide the Big XII with an early contender for GIF of the year....

WEST VIRGINIA 23, ALABAMA 33.  Projected to lose by more than three touchdowns, the Mountaineers picked up as if it were the fifth quarter of the Sugar Bowl.  Down by only three at halftime against the #2 team in the land, the WVA faithful were joined in their in-game thread by a few Baylor and OSU well-wishers; meanwhile, over at the Alabama blog,they were washing down antidepressants with whiskey.

A few ill-timed drops doomed what would have certainly been Upset #1(a) of the opening weekend, but even in loss, the temperature of Holgerson’s seat has cooled by a few degrees and the rumors of WVA’s irrelevance might have been shown to be greatly exaggerated.  The Mountaineers turned heads.

OKLAHOMA 48, LOUISIANA TECH 16. But you knew that.

"Boykin was just dreadful last year and as far as we were concerned just about anyone would be better.  Then along came a new offensive coaching staff, and lo and behold, Boykin looked pretty good tonight….  Boykin completed 70% of his passes for over 300 yards for two touchdowns and no picks, picked up 30 yards on the ground despite eating two sacks for -22 yards." 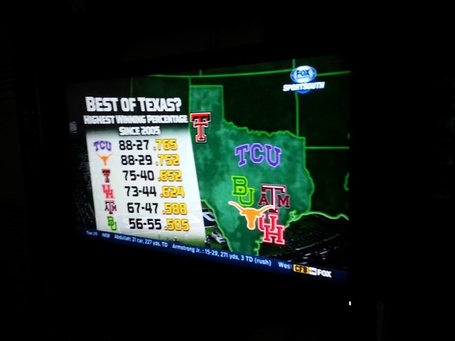 "Would you agree the offense performed better against an FCS team than the defense did?"  "[That’s] like being the smartest Kardashian."

Year two of the Klingsbury experiment saw his young team dealing with inexperience from freshmen and JUCO transfers, with a defensive line that needs serious work.  Several Raiders fans hinted that they missed Baker Mayfield.

KANSAS STATE 55, STEPHEN F. AUSTIN 16. Kansas State’s nonconference opponents have historically been mighty giants of football, and yet K-State somehow managed to tame the unstoppable Stephen F. Austin Lumberjacks juggernaut.  I’ll go ahead and link to the Bring On the Cats discussion thread, but seriously – don’t bother, it won’t tell you anything you wouldn’t have guessed by the score.

FLORIDA STATE 37, OKLAHOMA STATE 31. (Let me get this out of the way: the "Trail Of Tears" banner was insensitive and stupid, and I’ll not reprint it here.  The kid’s apology was well-done, and I don’t believe his idiocy represents the student body of the University.  Most everyone on Cowboys Ride For Free was appalled, and good on ‘em.)

Once again, the Big XII walked away with a moral victory at the hands of a top two team.  In what have been Upset #1(a), the ‘Pokes faithful seemingly experienced every human emotion ever recorded through the course of a game they honestly could have won.  Elation, supremacy, utter hopelessness, cleavage pics, it’s all there in the thread. Twenty years from now, sociologists will read through this thread in examining what it means to be an Oklahoma State fan.

"And I'll say it here...Tyreek Hill should be on a Heisman list."

No doubt the kid shows flashes of ridiculous talent, but one career college game does not a Heisman candidate make.

TEXAS 38, NORTH TEXAS 7.  For a stomping that doesn’t mean much nationally, this game was psychologically important to Longhorns fans.ad the score been closer than it was, questions about the Charlie Strong hire would be heard from Austin to Alaska.  The Longhorns won convincingly, especially on the defensive side of the ball: the Mean Green were held to 79 yards rushing and 15 yards passing (with four interceptions).

"Coaching was OK but there were a couple times when they did not have the right or enough personal [sic] on the field." -- 082288

"Offensively: Our OLine is obviously going to be the weakest unit on the team....  The RBs look good but not great, in part because of the OLine's inconsistent play." -- ACnDaHorns

More positive was the performance of junior quarterback David Ash, who played his first game since last September and was solid if unspectacular in going 19-for-34 for 190 yards and a touchdown, along with a rushing touchdown on 4th and goal from the one-yard line. The numbers could have been better for Ash, but two dropped passes by senior wide receiver John Harris hurt Ash early.