Our Top 25 countdown continues with a look at #20-16 where four SEC schools come up for debate over their worthiness.

Florida, Georgia, and Texas A&M should all be solid on defense this fall and Missouri...well...we're not sure. They also all have question marks on the offensive side of the ball as well. USC, North Carolina and Iowa are in there as well without debate. So, what do you think, are they Top 25 worthy? Sound off in the comments section below.

Matt: I may have made a mistake by leaving Missouri out of my Top 25. I look at losses at quarterback, running back, wide receiver, not to mention linebacker and cornerback, and just don't see them as Top 25 worthy. Tell me why I'm wrong.

Rich: Although they are losing their starting QB, Maty Mauk gained significant experience as James Franklin sat out due to an injury. Considering his youth (a RS Sophomore this upcoming season) his numbers were impressive with 1,071 total yards while completing 51% of this passes. However, the biggest stat may be his TD-to-INT ratio. On the season Mauk threw 11 touchdowns to 2 interceptions. Call me crazy but this kid could be one of the best quarterbacks in the nation next season let alone the SEC.

As far as the defense is concerned, I believe the Tigers strength may once again be at defensive end with talent like Marcus Golden and Shane Ray. However, if these two are not what I expect them to be, this preseason ranking could quickly go down in flames because of the secondary concerns you mentioned above.

Matt: I guess Florida is your Missouri because you've got the Gators nowhere to be found in your Top 25. No love for Coach Boom and his 17 returning starters?

Rich: This is a team that went 4-8 overall and 3-5 in the conference. Returning 17 starters from last season may not exactly be a hand up over the competition especially considering they were found blocking each other...

Are they deserving of a top 25 ranking simply because of their name or does the talent warrant it?

Matt: The SEC is all about the defenses...or at least that's what they say...and the Gators return nine starters from a crew that was the third best scoring defense in the conference last season. That alone is Top 25 worthy in my book, but beyond that they'll be healthy once again at the quarterback position and hopefully their unique blocking schemes can keep Jeff Driskel healthy in 2014.

Matt: Probably the biggest discrepancy in our Top 25 rankings is Georgia. The Dogs have running back Todd Gurley and then ten returning starters on defense. Do I have them too high (Top 10) or do you have them too low? 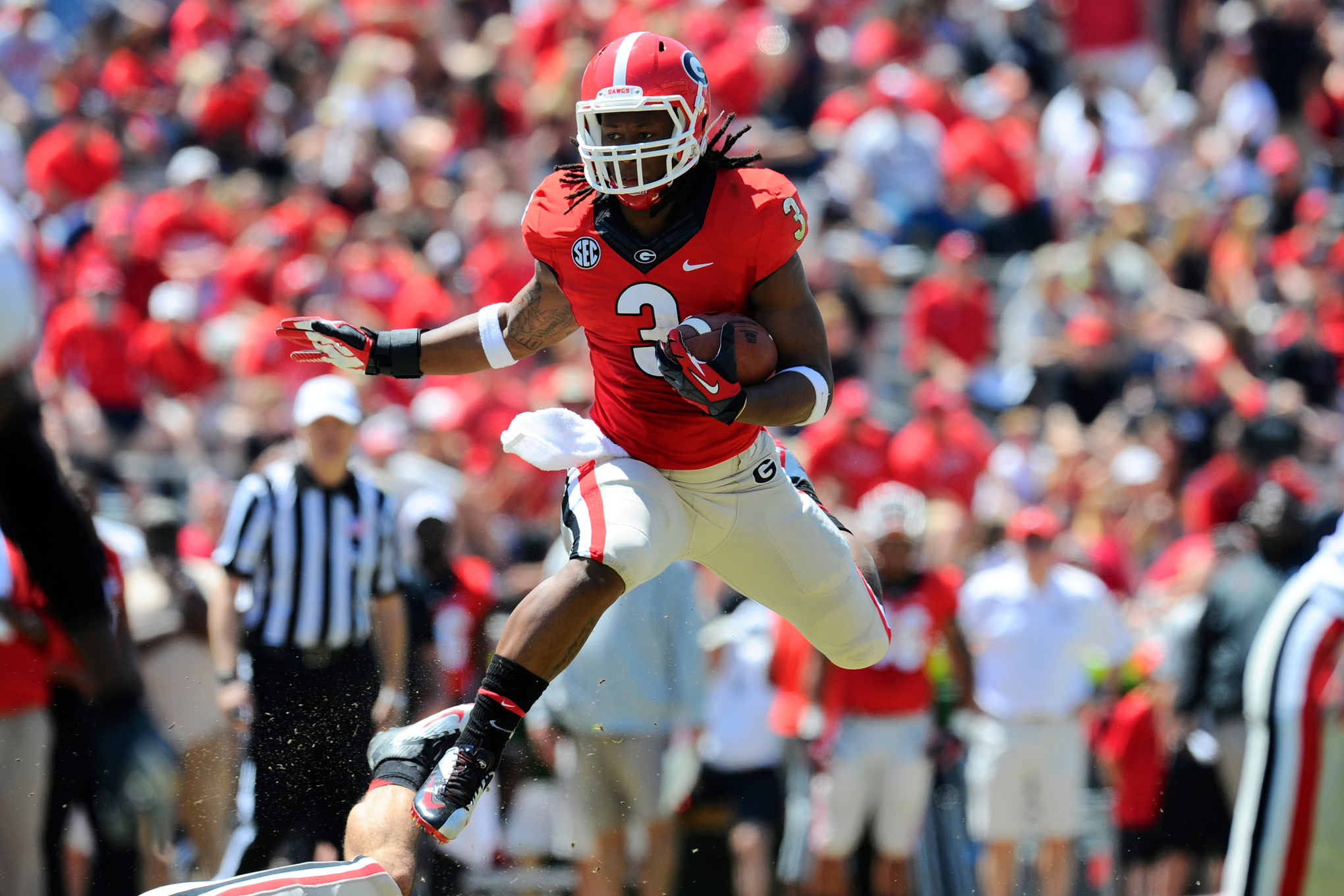 Rich: There is no doubt that Gurley is more than capable of winning the Heisman. Simply put, this kid is on another level. Knowing the SEC prides itself on defense, the offensive line could potentially become a liability after losing three starters. Losing the arm strength of a guy like Aaron Murray adds another set back. Although Gurley should be 100% this season I have not bought into the idea that the 2014 offense will be more explosive than past years.

Sure, the defense got an upgrade by adding Jeremy Pruitt to the coaching staff. Yet, this is still a unit that gave up nearly 400 yards per game.

Is Pruitt the missing piece for Georgia in order to turn it around and live up to their billing?

Matt: I think the addition of Pruitt plus the ten returning starters could produce an entirely different UGA defense that last season. While I agree that there are question marks along the offensive line and at signal caller, Georgia is loaded at the skill position spots. With defenses focusing on Gurley the transition for the new quarterback should be a bit easier.

Rich: Another team I left out this season was the Texas A&M Aggies. Without a few key cogs in the system, this is a program that looks to be under construction once again. Simply put, I'm struggling to find the playmakers. What convinced you to include them this upcoming season?

Matt: I should preface this by saying how much I detest the Aggies, but you can't deny the job that Kevin Sumlin is doing in College Station. Like the other SEC teams we've previewed thus far, A&M is loaded on defense (10 returning starters) and has question marks on the offense. However, they have four returning starters on the offensive line which is always a good foundation to build upon. I may hate them but there's no way to justify leaving them out of the Top 25.