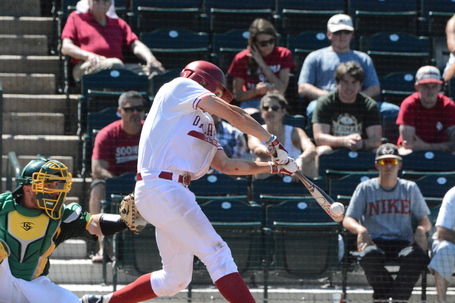 Oklahoma's seven-game losing streak came in a big way on Sunday with an offensive explosion that sets up a rubber-match for Sunday afternoon. It didn't start easy though as the Sooners, once again, had to play from behind.

The win puts the Sooners in a position that they haven't been in for a while now. "We're in a decent position here to win a series, something we haven't done in a while," Coach Hughes said after the game. "Hopefully we'll take advantage of the opportunity."

Baylor immediately put runs on the board in the first inning when leadoff batter Hayden Ross was hit by a pitch, with two strikes against him, and then advanced to third on an Adam Toth single through the left side. With runners on the corners, Matt Menard doubled down the left baseline to score both Ross and Toth for a 2-0 lead.

Craig Aikin led off the bottom half of the second with a double to right field and then moved to third on a Sheldon Neuse hit to center that couldn't be fielded by a diving Logan Brown. A sacrifice by Mac James would then score Aikin and draw Oklahoma to within 2-1.

The Bears would get their leadoff hitter on base for the second inning in a row as Mitch Price singled to right field. He went to third two batters later when Logan Brown sent the ball back to right, giving Baylor runners on second and third with just one out. Starting pitcher Jacob Evans record his first strikeout, as he hit the top of the Baylor lineup for the second time, but Brett Doe delivered a two-out double to center field to score both Price and Brown.

Trailing 4-1 going into the bottom half of the second, Anthony Hermelyn led off with a triple and then came home when Hunter Haley smoked a ball into center field. Haley would then be gunned down when Kolby Carpenter hit directly to second base. Carpenter would then take second, by swiping it, on the next pitch and then move to third on a sacrifice by Hector Lorenzana. Aikin tripled to right field, scoring Carpenter, to pull the Sooners back to within one.

With the game still up for Grabs, Coach Hughes made a pitching change at the top of the third by bringing in Robert Tasin. A leadoff walk of Menard would give the Bears a runner on base to start third consecutive inning. He moved to third on a two-out double by Aaron Dodson but ended up being stranded.

A two-out single by Austin O'Brien, followed by a blooper into shallow right by Hermelyn put the Sooners in scoring position in the bottom of the third with Hunter Haley at the plate but a pop out to left ended Oklahoma's threat.

The Bears made it their fourth consecutive inning with the leadoff batter on base when Logan Brown started the fourth with a bunt up the left baseline. Brown then stole second base to give the Bears a runner in scoring position with no outs. While it looked like Tasin would work his way out of a scoring position jam for the second inning in a row by retiring the next two batters, Adam Toth drilled his third home run of the year to extend Baylor's lead to 6-3.

Oklahoma took control of the game in the bottom of the fourth when they batted through the order (and then some), to score eight runs off eight hits. Hector Lorenzana got it started with a solo home run over the left field wall, putting the Sooners down 6-4 but they weren't close to being done. Aikin recorded his third hit of the game with a single to second. He was moved to second on a Taylor Alspaugh walk just before Sheldon Neuse loaded the bases with a single that nearly hit Aikin as he led off on second. The flood gates opened up for Oklahoma after that with Mac James delivering a 2-RBI single and Austin O'Brien juicing a 2-RBI double to left, putting the Sooners up 8-6.

"I would have considered this a must win, if you asked me before the game," Oklahoma catcher Hector Lorenzana (2/4, 2 RBI) said about the fourth inning. "We don't panic when we get down. I think we just kept our composure and kept string quality at bats together and we ended up having an eight run inning."

Hunter Haley was the ninth Sooner batter to take the plate in the inning. His two-out blooper to shallow center scored O'Brien from second to push the Sooners up by three runs. An error by Baylor short-stop Brett Doe scored Haley to make it a 10-6 lead. Oklahoma added one more run to their count, off the bat of Lorenzana, to hold an 11-6 advantage at the end of the inning.

After the Bears went down in order in the fifth, a pair of solo home runs by Sheldon Neuse and Anthony Hermelyn moved OU to a 13-6 lead.

Oklahoma starter Jacob Evans only lasted two innings after giving up four runs off five hits. Robert Tasin took the mound in the top of the third, trailing 4-3, and guided the Sooners through the next five innings. He allowed two runs, off four hits, but most importantly he put a stop to Baylor's offensive attack.

Kyle Hayes took over on the mound in the 8th. After giving up a double and a single, he threw a wild pitch that scored Baylor's seventh run but the Bears still found themselves down six going to the bottom half.

"Can't say enough about Rober Tasin," Hughes commented on his reliever. "You know you get that eight spot and you need to up a zero up there. He had a shutdown inning and then did it for three more innings for us."

At the end of the afternoon Oklahoma's offensive stat line read - 13 runs off 19 hits, with ever player in the lineup scoring at least one run. Three Oklahoma batters were a hit shy of the cycle with Craig Aikin's 4-for-5 performance leading the way.

A birth in the conference tournament could still be on the line as the Sooners and Bears play the rubber-match on Sunday afternoon at 1:00 pm.