The Women's College World Series kicks off at 11:00 AM CST on Thursday, May 29th as the Florida Gators take on the Baylor Bears in Game 1 hosted by Oklahoma City. 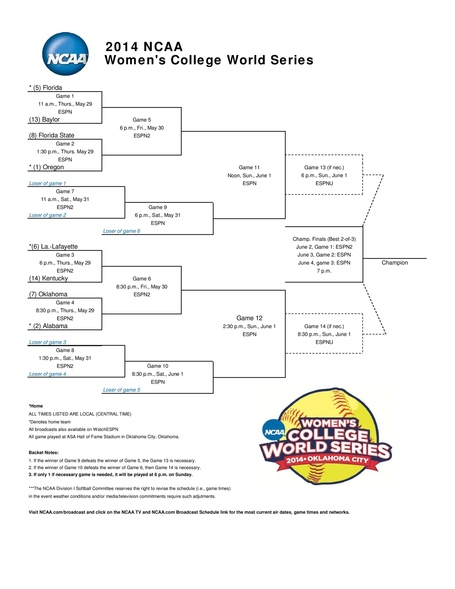 Game 1 At A Glance

The opening game of the WCWS will play witness to the top two active wins leaders going head to head in the circle. Baylor's Whitney Canion (1.40 ERA) has consistently terrorized the Big 12 conference with an array of pitches. Trying to match her pitch for pitch will be Florida's Hannah Rogers (1.68 ERA). However, the Gators possess possibly the best pitching staff of any of the WCWS teams with two more than capable pitchers behind Rogers.

Game 2 At A Glance

In game two, Florida St. Seminole, Lacey Waldrop, will make a case as to why she deserves to be named the player of the year. After giving up only four homeruns all season long, offenses know exactly what they are up against. Yet, the Oregon Ducks are the odds on favorite. Out to prove the No. 1 Ranking, the Ducks are a dangerous team capable of downing any team in the nation. Leading the charge for Oregon is the nation's top hitter in Courtney Ceo who boasts a .492 batting average.

Game 3 At A Glance

ULL has faced their share of ups and downs this season after preseason All-American Jordan Wallace fell victim to control issues. Fighting back with a new pitcher, ULL finds themselves in the WCWS against yet another unlikely opponent in the Kentucky Wildcats. After pulling off the biggest upset of the year by defeating No. 3 Seeded UCLA, the Wildcats are looking to prove they belong. Making their first appearance in the WCWS, can the streak continue?

Game 4 At A Glance

The SEC has slowly cemented itself as a national powerhouse when it comes to sports in general. With larger than life stadiums and fan support, it is no surprise that Alabama represents the conference yet again. This game features a rematch of the 2012 National Championship as the Crimson Tide defeated the Oklahoma Sooners in three games. The Sooners have possibly the hottest hitter in Shelby Pendley alongside a well kept secret in pitcher Kelsey Stevens and are on track to defend their 2013 title. Who will reign victorious this year?