The Sooners will officially begin the defense of their 2013 Big XII championship when the conference tournament gets underway on Wednesday but, unlike last year, they have a long road ahead of them. Up first for Oklahoma will be their sixth meeting against Oklahoma State this season. OU is 2-3 against the Cowboys in 2014 and while a win over their in-state rivals would even them up in the series, it would also give them a second round match-up against either Texas or Texas Tech, both of which swept the Sooners this year. On the flip-side, should OU fall in Bedlam 6.0 on Wednesday evening, they'll face either Texas or Texas Tech. Let's all take a sigh together now.

Making a deep run into the conference tournament is Oklahoma's only hope of qualifying for the NCAA. Keep in mind that the Big XII is the second best conference when it comes to RPI rankings and if the Sooners can get on a run like the one Kansas did a year ago then there may still be some hope of landing an invitation to the dance. 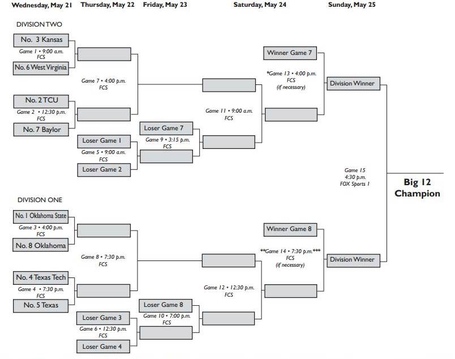 Oklahoma State - The Cowboys had their twelve game winning streak snapped in the Bedlam finale on Sunday but they will still go into Oklahoma City as the hottest team in the Big Twelve. Their 41-14 record is the best in the conference and their 18-6 record in Big XII play won them their first outright regular season title since the inception of the conference.

TCU - These are the Frogs that we were expecting to see when they joined the conference. TCU enters the tournament on a two-game winning streak and set the Big XII record for recording strikeouts in a season.

Kansas - The Jayhawks enter the tournament with a Big XII best nine-game winning streak. Their #3 seed is the best in school history.

Texas Tech - The Red Raiders are an up and down squad that can be very dangerous at times and very mediocre at others. Their #4 seed is their highest since the 2004 season.

Texas - The Longhorns missed the tournament last season but are coming back to Oklahoma City with a vengeance. They have the pitching that could make them very dangerous.

West Virginia - The Mountaineers were second in the conference in team batting average but a 3.55 ERA from their pitching staff burned them too many times this season.

Baylor - The Bears were dead last in the Big XII in batting average at .231 on the year.

Oklahoma - The one thing that the Sooners have going for them is that they are 8-0 against Oklahoma State in the Big XII Tournament.