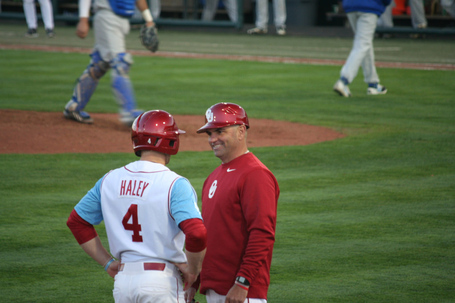 Oklahoma's offense got off to another slow start on Friday night and the Sooners found themselves playing from behind once again.

Cal State Bakersfield's Allen Gwyn reached base on error in the top of the second, when Hunter Haley had the ball drop from his glove after crashing into the right field wall, and then came home when Max Carter lined a single up the middle to put the Road Runners up 1-0.

CSUB extended their lead in the fifth when Jordie Hein squared to bunt and was hit by the pitch. Taking first, with two outs, Hein advanced to second on an infield single by Mylz Jones, and then came home on a Chance Gusbeth single to extend the Road Runners' lead to 2-0.

Josh Ake led off the bottom of the sixth with a double and then was sacrificed around to score by Craig Aikin and Dylan Neal to put Oklahoma's first run on the board and draw the Sooners to within 2-1 at the end of the 6th.

With fireworks from the softball field visible overhead from centerfield, the Sooner offense produced their own explosion in the bottom of the seventh. A one-out single by Mac James gave Oklahoma its first base runner of the evening. He then moved all the way around with next at bat when Austin O'Brien tripled to deep left center. With the game tied at 2-2, Hunter Haley put Oklahoma up by a run with a deep shot to right field that put him on second and scored O'Brien. Oklahoma then doubled up Cal State Bakersfield by a score of 4-2 off a Josh Ake single to short that scored Haley.

"I think he got a little tired and started getting up in the zone," Pete Hughes said in regards to CS Bakersfield starter Taylor Aikenhead. "Fortunately we were relaxed enough to take advantage of it."

Aikenhead went seven strong innings and held Oklahoma at bay until things slipped away in the sixth and seventh innings. He was responsible for all four of Oklahoma's runs but it took the Sooners a while to get to him. "That was a strong arm," Hughes continued, "and we've got to beat strong arms to get where we want to go."

That would prove to be the final score as Oklahoma's pitchers closed out the Road Runners by holding them hitless over the final two frames. Coach Hughes used five pitchers in the game and, outside of starter Corey Copping, they should be available for Saturday's doubleheader.

Copping was strong in his start but won't get a decision. He threw six complete innings, striking out five and allowing the two runs off five hits. Kyle Hayes, Jeffrey Curran and Drew Krittenbrink carries OU through the seventh and eighth innings, by holding the Road Runners hitless, before Ralph Garza, Jr. closed it out with a perfect ninth.

Ake and Austin O'Brien had two hits each to combine for four of Oklahoma's seven for the game. They both drove in runs and were instrumental to the Sooners' rally in the seventh.

"Tonight was a good win for us," Ake said. "Getting those runs in the seventh took a lot of weight off our shoulders and I think we'll be good the rest of the way."

Oklahoma and Cal State Bakersfield will conclude their series on Saturday with a double-header that starts at 2:00.