Sooners Out Slug Rutgers For 16-11 Win In Game One

Share All sharing options for: Sooners Out Slug Rutgers For 16-11 Win In Game One 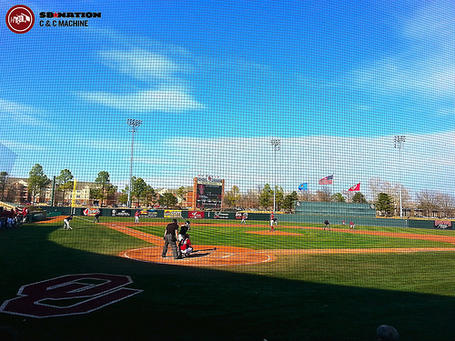 Hits came early and often in Oklahoma's first game against Rutgers on Friday afternoon, and so did runs. After falling behind 3-0 in the top of the second the Sooners responded by posting six runs across the plate themselves. The two teams would exchange a run in the third and then Oklahoma took full control of the contest in the fourth when they outscored the Scarlet Knights 3-0.

The game may have been a pitcher's nightmare but it was certainly a hitter's delight. Oklahoma burned through four pitchers and Rutgers matched them. Corey Copping improved his record to 3-0 on the year but it was far from his best performance of the season. Entering the game with a 0.00 ERA, Copping threw 4.1 innings, allowing five runs on seven hits while striking out two. He was relieved by Robert Tasin who gave up three runs in 1.1 innings. Jeffrey Curran pitched two-thirds of an inning before giving way to Drew Krittenbrink who finished the game. Krittenbrink recorded his first save of the season by going 2.2 innings. He allowed three runs on four hits but Oklahoma's offensive output was more than enough to cushion the blow.

Craig Aikin, Hunter Haley and Mac James all produced a three-hit game for Oklahoma while every player in the lineup recorded at least one hit. Haley, James and Buentello also produced three RBIs each with Buentello providing the hit of the game in the 2nd inning. With the Sooners leading 4-3 in the bottom of the second, Buentello took a 1-0 pitch and sent it over the right-center field wall, well past the 411 foot mark, for a two-run homer.

The win was Oklahoma's tenth of the season and their third in a row.