With one game left before the close of the regular season, the Big XII Tournament seeding is on the verge of being settled. The Kansas Jayhawks have clinched the top seed leaving a handful of teams to battle it out for the second seed.

Tomorrow evening, the conversation will cease but not before a few key match-ups. The Texas Longhorns, currently in a tie for second, travel to Lubbock to face a difficult Texas Tech Red Raiders squad. On the season, TTU has suffered one double-digit loss when playing at home.

In the afternoon, a surging Oklahoma St. Cowboys team will be looking overtake the sixth seed and avoid the play-in. Standing in their way, the Iowa St. Cyclones who have struggled dropping their previous two games.

While things have yet to be set in stone, here's what the bracket would look like if it were released today... 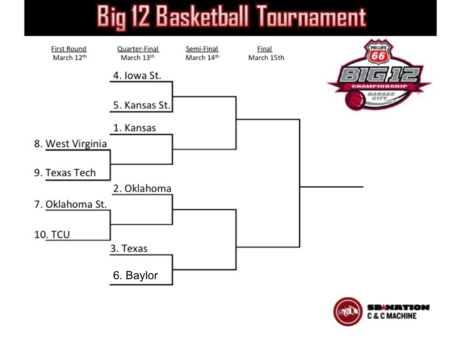 As you can see, the Oklahoma Sooners have a favorable draw with the play-in game featuring two teams owning a combined 0-3 record against Lon Kruger in 2013-14. Assuming the bracket stands and Oklahoma makes it into the semifinal, they will once again face a potential duo that combined for 0-4 against them. Can the Sooners shock the Big XII and more specifically, Kansas to win the tournament?