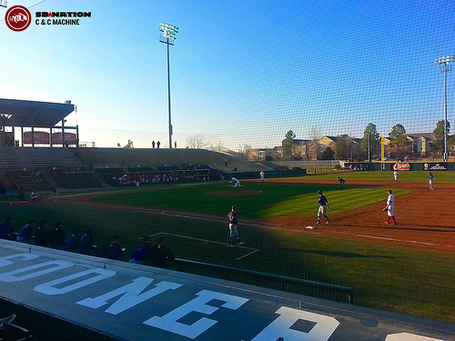 Mac James was huge behind the plate and the Sooner hurlers combined for six strikeouts as Oklahoma takes their second game in a row from Abilene Christian on Thursday afternoon with a 3-1 win.

All three of Oklahoma wins came in the third inning, led off by Hunter Haley crossing home plate off a Mac James double to right-center field. It was the seventh double of the season for James who now leads the Big Twelve in that category.

Taylor Alspaugh then brought James home in the next Oklahoma at bat when he singled to the right side. A Keach Ballard double (Oklahoma's second of the inning) would bring home Alspaugh to give the Sooners their three runs.

James finished the day going three-for-three from the plate with an RBI and a run scored. He was the only Sooner to record multiple hits during the game. "Some hitters just have a knack for understanding what locations they're hitting and finding the spots where defenders are not," Huges said about his team's percentage leader. "Mac always finds that six hole. Look at today, he hit a ball off the bag. He's just got that knack of placing the ball where the fielders arent."

Abilene Christian threatened in the 8th when Drew Krittenbrink walked the first two batters of the inning. Taylor Waters then singled to center field to push in the Wildcats first and only run of the game. Gunnar Buhner became the fourth consecutive ACU batter to reach in the inning, prompting Oklahoma coach Pete Huges to make the call to the bullpen for Ralph Garza, Jr. Garza quickly got the Sooners out of the jam by getting Jordan Forrester to hit into a double-play on a 1-1 pitch.

Jacob Evans recorded his first win of the season after entering the game in the fourth inning. He went 3.1 innings, recording six strikeouts and allowing no runs.

"I just trusted my stuff and everything was there, and I let my defense work." Evans said after the game. "The best thing that came out of today was Jacob Evans feeling good about himself," Coach Hughes added.

The Sooners start a three-game series against Rutgers over the weekend with a double-header that begins at 3:00 on Friday afternoon.