An up and down season for the Sooners comes to ahead as they will play the Big East Champion in the first round of the Women's NCAA Tournament. 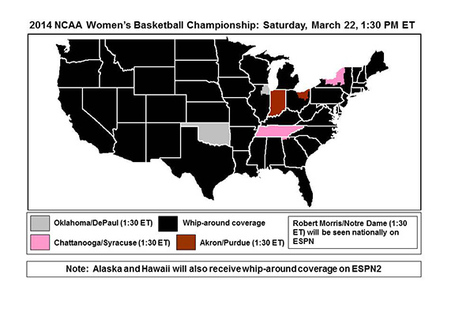 For Sherri Coale's Oklahoma Sooners, they would sweat out their seeding selection. Thankfully for their placement, they found out early on that they were going dancing. Their reward for dancing? The Big East Champions, the DePaul Blue Demons.

The Blue Demons are your Big East Conference Champs. They didn't play a super tough schedule, as the Big East isn't the juggernaut that it once was, but they're still a very formidable opponent and should not be taken lightly at all. They've only played two ranked teams all season, losing both by an average of 13.5 points per game.

DePaul's starters are their strong point, as all five starters score in double figures. They're led by Jasmine Penny, who's averaging 15.8 PPG and shooting 58 percent from the field. She'll get a lot of her shots from Brittany Hyrnko. She is adding 12.5 PPG. The guard ranks 30th in Division I with 5.7 assists per game and is 26th with 2.61 steals per game.

The Sooners and the 7th-seeded Blue Demons for the second time in their school's history and their first on a neutral court. Their first and only meeting was a 105-71 Sooners victory when Oklahoma was ranked #3 in 2006.

With being eliminated in the first round of the Big 12 Conference Tournament, it'll be almost a full two weeks since the Sooners have taken to the court, and with such an up and down season, it could be beneficial to get their legs and minds back under neath them for the tournament run. It's the longest layoff for the Sooners since 1981 when they had a 20-day layoff. Oklahoma had a 13-day layoff last season, and won their first two games.

The Sooners and the Blue Demons are a straight pick 'em if you're into gambling odds, so this is ultimately a toss up on the books. However, with a prolific scorer like Aaryn Ellenberg, the Sooners could be a big favorite if she plays up to her star potential. Ellenberg leads this senior core that has played in 455 games throughout their careers and don't want to be the first senior class to fall in the opening around since 2005.