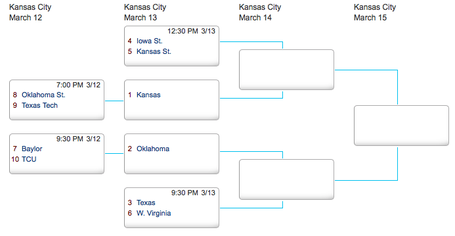 Andrew Wiggins - For the 10th consecutive season, the Kansas Jayhawks have won at least a share of the Big XII regular season title. Now, heading into the conference tournament, Bill Self loses a talented freshman and game changer in Joel Embiid. Once again all eyes focus in on Wiggins who poured in 41 points in the season finale, a game the Jayhawks dropped. There's no doubt that the 6-8 freshman guard is one of the premier talents in the nation. However, can he carry this team as the go-to guy?

Buddy Hield - Over the past two seasons, the Oklahoma Sooners have upped their level of play largely due to a trio of sophomores. After averaging just 7.8 points during his first season, Hield has more than doubled his output to 16.8 points per game as a sophomore. Behind 40.2% three point shooting and a knack for getting out in transition, this kid presents a tough match-up for anyone. Hield continues to lead vocally with a positive attitude as OU looks to take home some hardware this post-season. Will Hield continue torching the nets during the conference tournament?

Marcus Smart - While his 6-4 size presents a unique challenge at the point guard position, it's unlikely the rest of the Big XII will tune in to watch Smart for his playing style. Instead, viewers have grown accustomed to watching Smart for the wrong reasons. Projected as a top NBA Draft prospect, Smart's short temper and violent outbursts have the nation abuzz. Can this kid manage the anger to deliver on the promise he made to his teammates?

Melvin Ejim - Touted as the best all-around player in the Big XII, Ejim ranked second among scorers (18.2) and rebounders (8.6). Of course, the Iowa St. Cyclones rely on the three-headed monster of Ejim, DeAndre Kane, and Georges Niang making it tough to key in on one specific player. Although, March Madness earned it's label for a reason, ISU is looking like a champion. Can Ejim continue to tear up the Big XII?

Juwan Staten - Leading the league in scoring at 18.4 points per game, Staten has proved to be one of the best in the nation. With the ability to take over the game at any moment, Staten produced a season-high 35 points against a solid Kansas St. team. Once again this point guard looks to carry his team to victory. After playing 37.6 minutes per game, how exhausted is Staten?

West Virginia - The Mountaineers spoiled the Jayhawks chance at a No. 1 seed with a 92-86 win in the season finale. They've proven they can compete with anyone although the record may not show it. With the physical style of play and a scorer like Staten, I'm not sure anyone wants to play WVU right now.

Oklahoma St. - The Cowboys inherit an automatic disadvantage each an every year Travis Ford remains the head coach. The ability to bring in top talent does not automatically win games in the toughest conference in the nation. Instead, it's all about how a coach develops the raw talent. The Texas Tech Red Raiders have made each and every game uncomfortable for their opponent. If OSU falls back into old habits, they can easily be upset during the play-in game.

Kansas - Earlier in the week, KU looked like a clear cut favorite to win the conference tournament. Without Joel Embiid on the floor, the Jayhawks defense takes a step backward. Assuming the Oklahoma St. Cowboys advance in the play-in game, they could find a favorable match-up against Bill Self. It certainly won't be an easy win for either side. Finding themselves on the tougher side of the bracket, Kansas has their work cut out for them if they hope to take home the Big XII Tournament title to go with the regular season title. 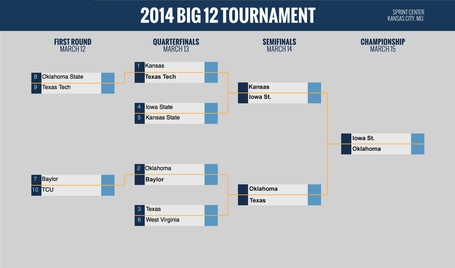 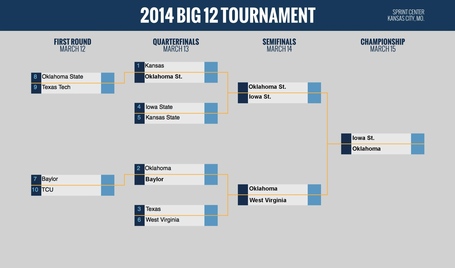 Sunday evening on the podcast, Matt and I gave our predictions for the conference tournament. Although we disagreed on a few teams, we both selected Iowa St. and Oklahoma to play in the Championship game (before news of Embiid's injury) with the Cyclones coming out ahead. How correct were we? We'll all soon find out as tournament play begins later today.