Share All sharing options for: West Virginia Mountaineers Extend Streak To 3 With Win Over Oklahoma Sooners

After a long, irregular journey to Morgantown, WV, the Oklahoma Sooners looked out of sync. Meanwhile, the West Virginia Mountaineers quickly got to business connecting on a pair of three point attempts early to take a 10-8 lead. From then on, the Sooners challenged frequently but never quite overcame the performance of the WVU guards as Bob Huggins and his squad walked away with a 91-86 win in overtime.

Arriving at the arena with just over an hour before tip, Lon Kruger began to prepare his team as the pre-game rituals were out in full force. The sluggish start played witness to a lack of ball movement as the Sooners found themselves limited offensively. During the final 20 minutes of regulation, OU pulled off what was said to be impossible...erasing a 14 point deficit to force overtime.

The momentum stopped there as WVU outscored Oklahoma 10-5 in overtime to seal a victory. 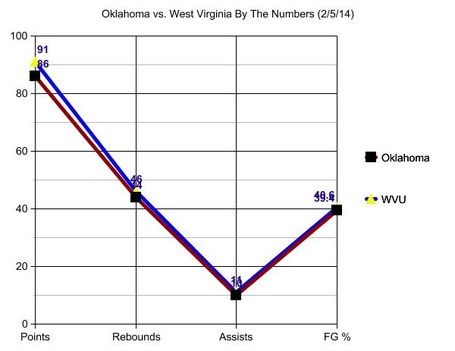 Eron Harris put on a clinic in the second half scoring 26 of his 28 points after the break. On the evening Harris continuously stretched out the floor showing he was not afraid of firing up shots from deep. A total of 18 points were collected on 6-of-13 from beyond the arc as Harris led all scorers.

Helping in the effort, Terry Henderson found open looks from beyond the three-point line, once again spreading the floor out that much more. Henderson finished 3-of-8 from range along with 17 points. As a team, the Mountaineers shot 34.4% from three-point land to secure the overtime win.

The team leader, Juwan Staten added 20 points of his own en route to a double-double with 10 rebounds. Although he may be small in stature, Staten has proven he knows how to finish at the rim coupled with a knack for leaping over the bigs in the blocks.

While Cameron Clark continues to struggle to find a rhythm, Jordan Woodard put up one of his best games of the season. Shooting for 8-of-11 from the floor and 7-of-8 from the charity stripe, Woodard poured in 23 points. It is clear that this is a point guard who excels when being aggressive and getting to the line.

Buddy Hield gave support in the effort despite leaving early due to an injury. Hield returned shortly after adding 15 points on the board. Ryan Spangler aided Woodard as well with 10 points and 9 rebounds although he found himself in foul trouble in the first half.

The praise goes to Tyler Neal tonight due to his efforts late. It could be said that Neal willed Oklahoma to an overtime game on the road after possibly the worst travel arrangements. Down the stretch Neal had the hot hand attempting a few threes that rimmed out. Yet, he finished the game with 16 points providing a much needed spark off the bench.