The Oklahoma Sooners limped home from Orlando after dropping two of their three games in the UCF Tournament. While there's much to be said about Oklahoma's offense being held to season lows, there's also another major story brewing about the three starters struggling with control under pressure. 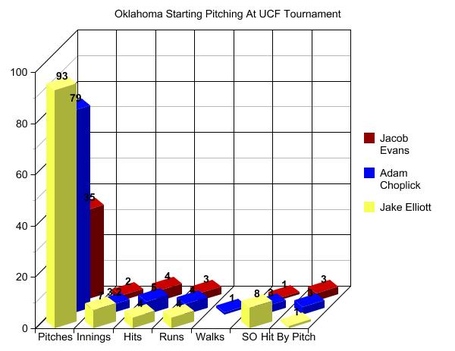 Saturday starter Adam Choplick also struggled with control but it was really just one inning that became costly for the Sooners. Oklahoma's pitchers threw six shutout innings in the game, including the final four of the game. However, three hit batters, three wild pitches, and a walk that scored a run in the fourth inning out the Knights up by what would ultimately be the final score of 4-1.

Freshman Jake Elliott had the strongest performance of Oklahoma's weekend starters but it was still to no avail. He went seven innings and fanned eight Ohio State batters but was on the hook for four of the Buckeyes' six runs. Once again it was the fourth inning that got to the best of an OU starter as that was the inning things came unraveled and Ohio State turned a 1-1 game into a comfortable 4-1 lead.

While there's frustration for Oklahoma fans in a losing weekend the optimist would point out that the Sooner starters were close to having all around great performances. These guys are still young and it will take time for them to not pitch tight in pressure situations. While a single bad inning can kill you in a close ball game, there's something to be said in that, for the most part, we're only talking one bad inning. 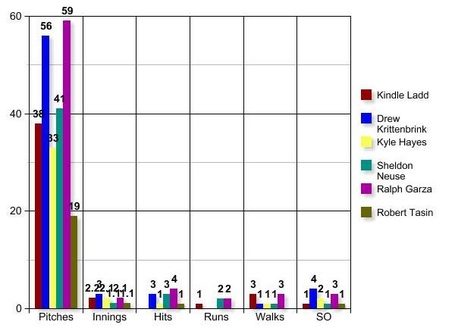 Drew Krittenbrink was solid again in relief over the weekend. Only giving up three hits, he was not scored upon and also recorded the highest number of strikeouts of anyone in the bullpen. You would have to think that if Evans can't get things going then Krittenbrink would at least be considered as a possible starter. The entire bullpen was good in that they only allowed five runs in three games and recorded a dozen strikeouts, but they also walked nine batters.

Bottom line is, Oklahoma's pitching staff wasn't great over the weekend but they were good enough to put the team in a position to win every game. The flip-side is that the Sooners wen't cold from the plate and that could very well be an even bigger concern as they head west to Arizona this weekend.