Oklahoma's pitching wasn't dominant in the opening weekend of the 2014 college baseball season, but it was more than enough to record a series win.

Share All sharing options for: The Pitch Count | A Review Of Oklahoma's Pitching In The Seton Hall Series

Perhaps the biggest question mark going into Oklahoma's season opening series against Seton Hall was surrounded around the Sooner pitching staff. The losses of Dillon Overton and Jonathan Gray to the MLB  draft left fans wondering if there was enough heat left in the bullpen to carry OU through 2014? The answer provided through the first three games of the season is that Oklahoma is going to be OK. 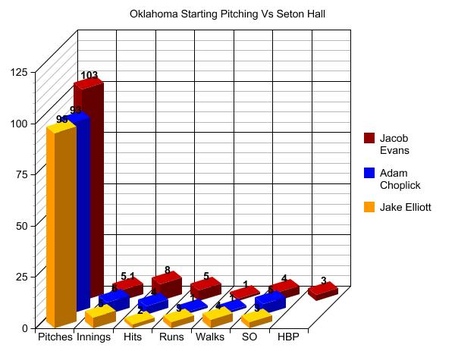 After being one of Oklahoma's most reliable arms out of the bullpen in 2013, Jacob Evans made his debut as a starter in the opener on Friday. Unfortunately he was responsible for five runs,gave up 8 hits, and struggled a bit with control. He was the only one of the starters to be saddled with a loss for the weekend.
"I thought he was awesome. I thought he threw a lot of strikes and pitched well with runners on base, when he had to. He fielded his position and his fastball was really good." -Oklahoma baseball coach Pete Hughes on Adam Choplick
Another Sooner making his starting debut was freshman Jake Elliot who got the nod in Sunday's rubber-match game. Despite being on the hook for three runs he delivered an impressive performance in a must win game. Perhaps the biggest knock against him was the number of walks he allowed but he did more than enough, and had the offensive support, to get the win and take the series.
The most impressive performance of the weekend came from Saturday starter Adam Choplick. He had the highest pitch count and threw the most innings, recording five strikeouts and just one run. 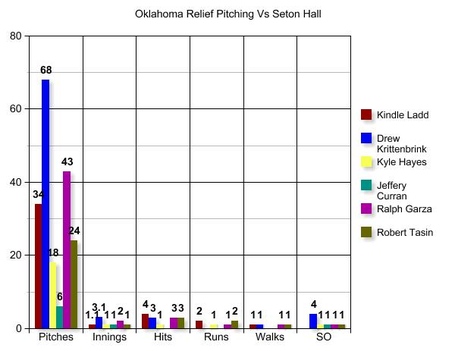 Drew Krittenbrink was strong coming out of the bullpen. He pitched twice over the weekend, providing the most innings of relief, and looks to be a guy that Coach Huges will call upon regularly. Ralph Garza, Jr. has been designated as the closer and saw action both on Saturday and Sunday. He's was the only other pitcher to see action in multiple games. Jeffery Curran gets credit for the shortest relief stint. He only threw six pitches in a single inning of work on Saturday.
Seton Hall wasn't the strongest test for the Oklahoma pitching staff but it was a solid one. Now, as the season progresses, we would expect them to grow stronger and more confident as Big XII conference play approaches.