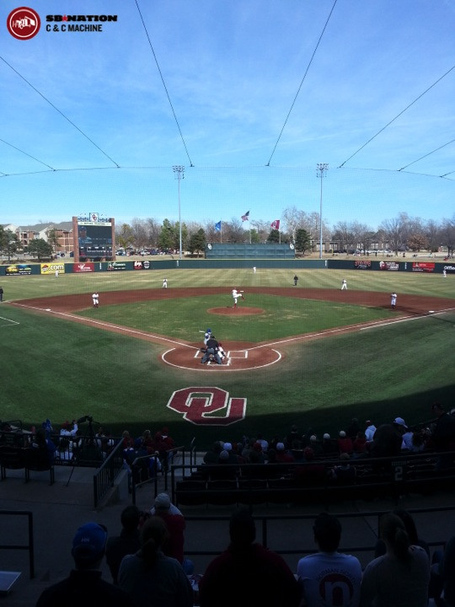 Saturday was a big day of firsts for the Oklahoma baseball program. Scoring an 8-2 win over Seton Hall for their first win of 2014 is just one of the many premier accolades for the afternoon. It also marked the first win of Coach Hughes tenure as the Oklahoma baseball coach. Freshman Sheldon Neuse recorded his first hit as a Sooner and then his first collegiate home run. Anthony Hermelyn batted cleanup for the first time as a Sooner and then also delivered his first home run as well. The homeruns came back-to-back in the 7th inning which was the first time Oklahoma has accomplished the feat since May 7, 2010 against Oklahoma State.

The story of the day, though, was freshman Sheldon Neuse who was explosive from the plate. His first career hit as a Sooner came in the fourth when he tripled to left-center field, scoring Taylor Alspaugh. He then went yard in the seventh, scoring Alspaugh and Craig Aikin, to put the game out of reach.

"I saw the guy coming out of the pen and I said, 'hey he likes to go off-speed let's sit on the fastball and react,' Neuse said about his homer. He threw the first pitch fastball and then came back with the off-speed and I though, okay, I know that I can hit both now. I just needed to get it elevated and get at least one run in. What ever happened we wanted to at least get one run in and do our job, then it went up and got out."

In his first appearance of the 2014 season, Adam Choplick gave the Sooners six complete innings. He struck out five Seton Hall batters, gave up four hits and was responsible for just a single run. The Pirates weren't able to get to him until the fourth inning when they recorded their first hit.

"I thought [Choplick] was awesome," Coach Hughes said about his starter. "I thought he threw a lot of strikes and pitched well with runners on base, when he had to. He fielded his position and his fastball was really good."

Junior Taylor Alspaugh continued his hot weekend by going 2-for-5 and scoring two runs and made a great diving catch in right field. He said that the main difference between Friday and Saturday was the team's approach and mentality. "I think a lot of it is also the rhythm of the pregame, and the meal, being around the coaching staff and how everybody just functions together." Alspaugh said. "First game out everybody was tight and didn't even know when to put their jerseys on. Today it was kinda, hey let's go focus on playing baseball and get the results in between the lines and I think that's what we were able to do today."

The Sooners play the final game of their series against Seton Hall on Sunday afternoon. First pitch in the rubber match is set for 1:00 PM.