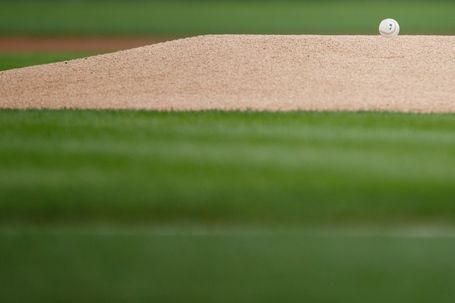 We're talking about six or seven guys to fill out four or five rotation spots, that speaks to depth in your pitching staff. That gives me a good problem to have honestly.-Pete Hughes

When it comes to arms out of the bullpen Pete Hughes has a whole lot of options at his disposal. The deepest position on the team are the guys who take the mound. Oklahoma has a total of 17 pitchers (4 lefties/13 righties) vying to replace Dillon Overton and Jonathan Gray who have moved on to pro ball. Narrowing down the field may be the biggest challenge that Coach Hughes faces early on in his tenure. As the season plays out we'll see for sure who emerges as the go-to weekend guys but as of now the coach seems to at least have a hunch as to who his possible starters would be.

If I had to lean on it right now and give you some names, I would think it would be Jacob Evans, Adam Choplick, and we'll probably look for a freshman, whether its Jake Elliott or Octavio Rodriguez to fill out our rotation. We've got some dependable veteran guys that I'm kind of hesitant to take them out of that bullpen because it's so valuable to have that guy who can put out a fire three or four times a week for you. - Pete Hughes in an interview with CCM on February 2nd

Guys like Ralph Garza Jr, Kyle Hayes and Robert Tasin are looking to start the season as guys who will come out of the pen as opposed to starters. Its a great plan, as Coach Hughes already stated, because it allows the Sooner coaching staff to have confidence in their bullpen.

LH Sophomre Adam Choplick (6-8/261) - A guy that Coach Hughes is expecting big things from, and probably a guy that Bob Stoops would love to get a look at, Choplick showed flashes of his potential in outings last season. He also struggled with injuries at times through the season causing him to drop a once 3-0 record to 3-3 on the year. He ended with a 5.56 ERA and fanned 36 batters.

"Adam is 6-7/6-8 and guys aren't used to seeing the ball come from that release point. That's where the deception and difficulty comes in, not so much the V-Low, all the guys at this level can handle the V-Low, they're not used to seeing it coming out over seven feet. Guys aren't used to focusing on that area when they're picking up a baseball." - Pete Hughes in an interview with CCM on February 2nd

RH Freshman Jake Elliott (6-7/200) - Anytime the coach calls out a true freshman as a possible starter before he ever takes the field to begin his collegiate career it says a lot about what the team thinks of him. That's the position that Elliott and Octavio Rodriguez find themselves in.

Elliott was a four-year letter winner at Coppell (TX) High School. He was also a two-time All-District pitcher and a Louisville Slugger second team All-American in 2013.

LH Sophomore Jacob Evans (6-2/205) - Led the team with 9 saves and a 7-2 record in 30 total appearances during his freshman campaign. Recorded a 2.06 ERA for the season. The ability to throw two lefties in a weekend is an advantageous opportunity for the Sooners and Evans is one of three possible options.