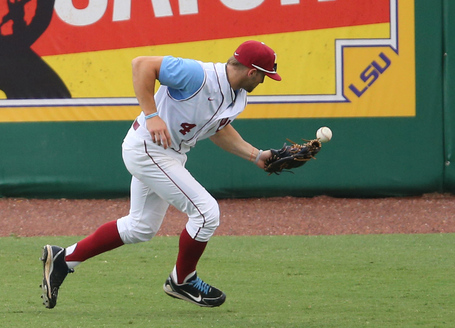 This year you're looking at a team that we inherit where the two top hitters are gone and four of the nine starters are gone. -Pete Hughes

Oklahoma may be young in the outfield as they start the 2014 baseball season but at least they are experienced. Whereas the infield may have multiple personnel options, and questions, the guys in the grass are returning players who helped lead the team to a Super Regional last season. Not only are they solid in the field, they are also contributors on offense but batting a combined .244 last season.

Oklahoma's outfield combines speed and power on offense along with sound defense. Some of the biggest hitters on the team are from the outfield, and will no doubt be looked upon to fill the void of Matt Oberste and Jack Mayfield, but perhaps the best base-runner in the entire Big XII plays in the Sooners' outfield. This is the group of guys that will have to lead this team early on in the season.

Sophomore Craig Aikin (5-10/170) - A speedster who can make your pay dearly for booting the ball or throwing a wild pitch, Aikin led the team, in 2013, with 16 stolen bases. He started in all 64 of Oklahoma's games last season and produced a .286 batting average, with 23 RBI, and crossed home plate 42 times.

Junior Taylor Alspaugh (6-0/175) - Possibly the Sooners' best defensive outfielder, Alspaugh recorded a perfect fielding percentage in 2013. He appeared in 21 games through the season but took on a starting role in the postseason. He batted .189 for the year but also posted a .286 on base percentage.

Sophomore Hunter Haley (5-10/175) - Mentioned specifically by Coach Hughes as one of the guys that could fill the role as a power hitter in 2014, Haley batted .264 last season and had a slugging percentage of .389. He tied for the team-high with four triples despite only appearing in 48 games, with 45 of those being starts.

Freshman Cody Thomas (6-5/215) - Its not sure how much of an impact Thomas will have immediately with the baseball team because he's been splitting duties between the baseball and football programs. One thing that we do know is that he's raw and talented. He was a three-year letter winner, three-time All-District and two-time District MVP at Heritage High School in Colleyville, Texas. He was also drafted by the New York Yankees in the 30th round of the 2013 MLB draft.

"Cody is hustling around and doing both right now. Give him credit because he's super talented. He's raw but his skill set, specifically his power-tool, if off the charts. We've got to organize his weeks, get him his reps, and put him in a situation when he's playing he's prepared to play and I'm not going to do that until we get to that point with him. I'll give him credit, he hadn't seen live pitching in...I don't know...seven months and he came out of the gates day one and got three knocks off a live arm. That'll tell you what kind of athlete he is." - Oklahoma Baseball Coach Pete Hughes in an interview with CCM on February 2nd.