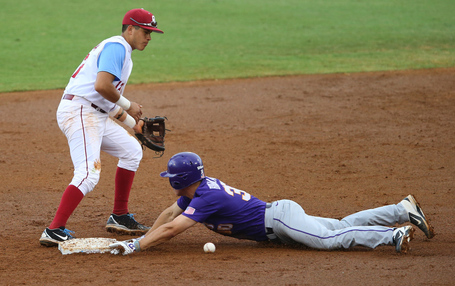 As Pete Hughes starts his head coaching tenure at Oklahoma one of his biggest challenges is going to be finding someone to replace the power of Matt Oberste and Jack Mayfield. The two combined to be OU's top home run hitters and RBI leaders, but Mayfield also led the team on the diamond from the shortstop position.

When talking about his need to replace some power from the plate, Coach Hughes said that he had multiple options from the returning players but also raved about some of his incoming freshmen.

"I'm a big believer in work ethic and kids getting better, I think (Anthony) Hermelyn, (Hector) Lorenzana, (Kolby) Carpenter and (Hunter) Haley those guys have had a lot of at bats. It takes some at bats to figure out how to be a power guy too, and start elevating baseballs you didn't in the past. I look to see a couple of those guys to provide a little punch for us but honestly we have three freshmen that I think are going to hit in our lineup and bring some power to the lineup." - Oklahoma Baseball Coach Pete Hughes in an interview with CCM on 2/13/14

Regardless of where the power comes from the thing that we know for sure is that Oklahoma needs it. The other thing that the Sooners need from their infield is mistake-free defense. That's a tall order for a group that is really only returning three starters and will potentially feature a trio of freshmen in 2014.

Sophomore Anthony Hermelyn (6-1/200) - A starter in 48 games behind the plate last season, Hermelyn was fourth on the team in batting average at .275 for the year. He knocked in 26 runs in 2013 while also drawing 23 walks and recording 14 multi-hit games.

Senior Hector Lorenzana (5-11/190) - You could make the argument that Lorenzana is the team leader as he is now Oklahoma's most experienced infielder. A starter in all 64 games last season (at second base), Lorenzana batted .274 and knocked in 42 RBIs which placed him second on the team.

Freshman Austin O'Brien (6-3/200) - A three-time letter winner at Owasso (OK) High School, O'Brien was named the Oklahoma Gatorade Player of the Year in 2013, and was a Louisville Slugger and Max Preps All-American, while leading Owasso to the 6A state title.

Freshman Sheldon Neuse (6-0/195) - One of three freshmen (along with Buentello and O'Brien) singled out by Coach Hughes as guys who will take the field in 2014, Neuse is a power hitter that will bat in the middle of the lineup. Neuse was named District MVP both his junior and senior years of high school and was a four-year letter winner at Keller (TX) Fossil Ridge.