The Iowa St. Cyclones snapped the Oklahoma Sooners 4-game winning streak, 81-75 behind a career night for Georges Niang. With the win, Fred Hoiberg and company gain momentum in the Big XII. Now sitting at .500 in conference, Iowa St. appears to be back on track in the nation's toughest league. 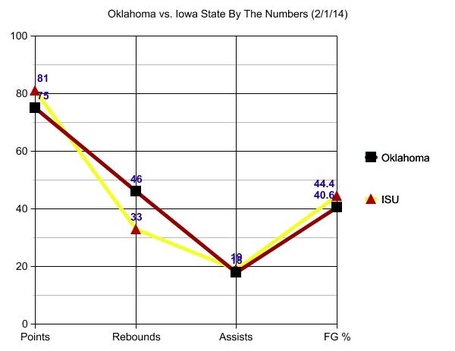 In an attempt to make a serious change, Fred Hoiberg once again tinkered with his starting line up. Monte Morris was inserted at the point which allowed one of the best players in the nation, DeAndre Kane, to roam more often. The decision paid off even though Kane finished with just five points.

Melvin Ejim continued his tear through the conference recording a double-double. With 16 rebounds and 22 points, the trio of Ejim, Niang, and Morris proved to be too much on Saturday.

Hoiberg narrowed his rotation to seven players on the afternoon.

After giving up a league worst 78 points per game defensively, the Cyclones put up one of their best performance to date. Although the Sooners were all over the glass (46 to 33 rebounds), ISU held them to 40.6% shooting from the floor and a mere 30.8% from range.

Yet, the biggest difference may be found at the charity stripe. On Big Monday, OU attempted 42 free throws to seal the deal against a top ten program. Tonight, Oklahoma made 14 trips to the line connecting on 11 of those.

For the Sooners, Buddy Hield led the team in scoring with a career high 30 points. However, Niang matched him point for point with 27, a career high as well. As Oklahoma looked to take the lead, it was a three pointer from Niang that pushed ISU to six points ahead with 55.5 second remaining. Lon Kruger, despite his efforts from a coaching stand point, never were able to recover as they dropped to 6-3 in conference.

Without little help off the bench, Hield was unable to find another scorer. Jordan Woodard put up 10 points while Isaiah Cousins added another 13.

Oklahoma continues on the road with West Virginia on the horizon before returning home to face the Baylor Bears.