Oklahoma Sooners Make It 10-Straight At Home Against Oklahoma St. Cowboys With 88-76 Victory

Share All sharing options for: Oklahoma Sooners Make It 10-Straight At Home Against Oklahoma St. Cowboys With 88-76 Victory

For the tenth consecutive time, the Oklahoma Sooners have defended home court against in-state rival, the Oklahoma St. Cowboys. While the bench sparked an early 20-10 behind a 12-0 run, it was a team effort keeping the little brother at an arms distance due to foul trouble. Tyler Neal stepped in and contributed 15 points as OU sealed an 88-76 victory over a quality opponent. The resume continues to build! 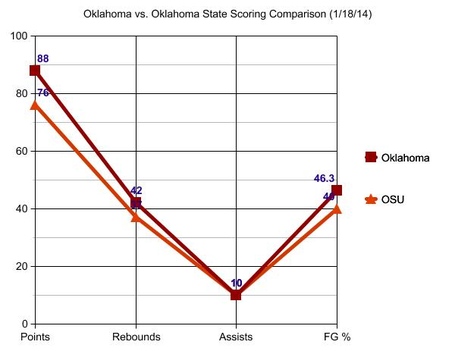 Oklahoma St. found a rhythm thanks to solid guard play. Hitting a pair of three balls, Marcus Smart scored the Cowboys first six points as they strayed away from attacking the rim. Markel Brown followed suit hitting a long two before throwing down a vicious dunk for OSU's first points inside the paint. Knowing the Sooners lacked depth in the blocks, analysts considered to question Travis Ford's decision to stick with perimeter game. Then it struck...

Ryan Spangler, considered to be a crucial piece of this team, found himself on the bench with 9:42 left in the first half. After a successful outing, questions surfaced as to how well this team would perform without him on the floor. However, the Sooners found a bit of relief as Le'Bryan Nash and Marcus Smart picked up two fouls a piece in the first half relegated them to the bench. Three of the biggest names in the game now sat on the sideline while a familiar name took over.

Possessing the ability to hit from anywhere on the floor, Phil Forte III single-handedly willed the Cowboy to within five at 33-38. Despite his efforts, O-State never regained the lead an trailed 38-46.

The second half played witness to a resurgence of Jordan Woodard. Scoring just a single point in the first half, Woodard continued to take advantage of his counterpart, Smart, being in foul trouble as he consistently drove the lane offensively and created turnovers on defense. The game may have been summed up in a single play as Woodard got Brown in the air hoping to draw contact. Instead, he tosses up a prayer that dropped in from behind the arc. The rest was history as Woodard dropped 17 of his 18 points in the second half.

Spangler was not to be outdone by the frosh though. Pulling down a career high 17 rebounds after missing 11 minutes in the first half is almost unheard of. There is no denying it, Spangler sets the tone for this team and will continue to be counted on to play bigger than he truly is.

Often playing from a double-digit deficit. Forte came alive once again as he pouring in three-pointer after three-pointer on 6-of-6 attempts to finish with 20 points. The stars of the squad, Nash had a disappoints outing as he fouled out with just 8 points while Smart dropped a game high 22.

Up next, the Sooners will have a rematch with the Iowa St. Cyclones on February 1st.