The TCU Horned Frogs were picked to finish at the bottom of the Big XII Conference this season and it appears that is a likely scenario. Currently on a five games skid, this squad could play the part of resume killer on any given night. When Trent Johnson took over, he knew this was an enormous challenge. After finishing last season 11-21 with just two wins in conference, this is a Horned Frogs team looking for any sign of improvement.

One thing Coach Johnson is known for is developing big men. With that notion, Karviar Shepherd, a 6-10 freshman could develop into one of the better centers in the conference. Shepherd averages 8.2 points and 7.4 rebounds per game giving him a solid foundation to build off of. However, it doesn't answer the question of where all the points will come from tonight as TCU only manages to drop 65.9 points per game. 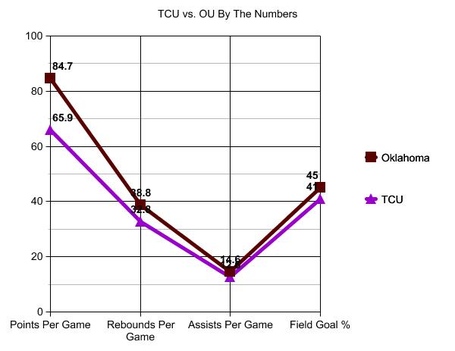 An Oklahoma City product, Amric Fields stands 6-9 but missed last season with an injury. He will be depended upon to add to Shepherd's numbers down low but not specifically in the rebound category. Points are what TCU is looking for in the blocks and Fields brings another 13.7 to the table.

Kyan Anderson leads the guard play and can make some big time three's...a trait that goes against the head coach's mentality of the 3-pointer being used as a last resort. Behind a team leading 97 free throw attempts, it is safe to say that Anderson knows how to get to the free throw line. Not only does he make frequent appearances at the charity stripe, he is knocking them down at an 81.4% conversion rate. Free throws are a major reason this junior point guard averages a team high 14.6 games and rarely finds time on the bench.

The only other Horned Frog to average double digit scoring is Brandon Parrish, a 6-6 wing player, with 10.2 per game. Earning valuable minutes, this freshman may be the future of TCU basketball. Talent sits on the roster but it is inexperienced talent. With the 34th ranked incoming class, Coach Trent could make waves in the Big XII in the coming years.