The Sooners have landed a verbal commitment from a highly touted DB from Houston, TX. Jordan (6'1" 185lbs) decommitted from Northwestern after his visit to OU this weekend.

Your boy is now officially committed to be a sooner... http://t.co/EZpZnFzbfH 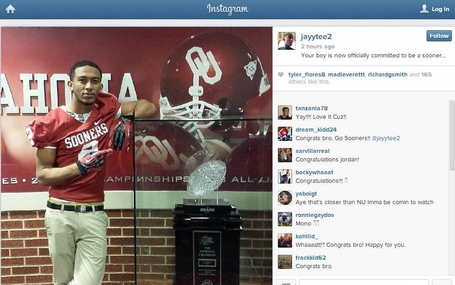 Bobby Jack Wright may have been the coach that recruited Thomas but Freshman All-American Zach Sanchez is taking his fair share of the credit after hosting the former Northwestern commit this weekend.

Oh yeah shout out to @ZSanchez15 for hosting me this weekend ! It's be real OU see y'all real soon!

Josh McCuistion at SoonerScoop were the first to break the news of Thomas flipping from the Wildcats to being a Sooner and had even called it earlier Sunday night as a guest on Crimson And Cream Machine's Sooner Nation Podcast.

Thomas had been a longtime commit to Northwestern but cited proximity to home, after visiting Norman this weekend, for his recent change of heart.

In addition to Oklahoma and Northwestern, Thomas a 6-1/180 defensive back from Klein, Texas, also received offers from Oklahoma State and Utah.