Is The Zone Read Working For Oklahoma Football?

Oklahoma's quarterbacks are averaging over seven yards per carry for the Sooners.

Share All sharing options for: Is The Zone Read Working For Oklahoma Football?

There's no denying that Oklahoma has made some significant changes within their offensive scheme this season. With a renewed emphasis on the rushing attack, the Sooners are averaging 310.5 yards per game on the ground which is good enough to give them the 12th best rushing attack in the nation. Brennan Clay is running as hard as he ever has for the Sooners and Damien Williams looks every bit as powerful and quick as he did in 2012. However, the key to Oklahoma's success on the ground this season has centered around the quarterback position where OU has introduced the zone read into their playlist. 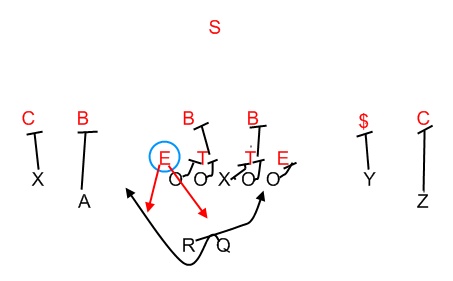 The zone read is a play that gives the quarterback a few options based on what the defensive end does on any given play. Reading the end is the key to success and if done improperly it can lead to complete disaster but if done properly it can lead to great things for the offense and great frustration for the defense. Here's a sample of how it played out in Oklahoma's season opener against Louisiana-Monroe.

Oklahoma is lined up in the diamond formation, which is basically the inverted wishbone, giving the defense multiple options that they have to consider. There are three running backs that could get the ball, the quarterback could keep it, or there are five different passing options here.

This play sets up with the blocking schemes to run to the right side. Naturally it draws the defensive attention in that direction and you see the majority of the defenders moving that way. Trevor Knight has the ball in the gut of running back Brennan Clay (#24) but he's watching the left-side defensive end. If the end crashes and commits to pursuing the running back then Knight should pull the ball and keep it to the left-side. If the end stays home then Knight should let Clay keep the ball and go to the right side. 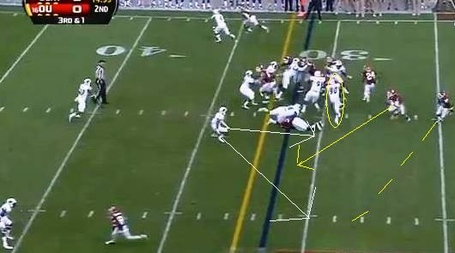 Now we see the defensive end crashing hard after Clay, believing that he has the ball. Trevor Knight is now running the ball left and the deep back (Roy Finch) has switched back to his left and is trailing to give Knight a pitch option. This gives the linebacker the decision of  having to go after the quarterback or the pitch-man. 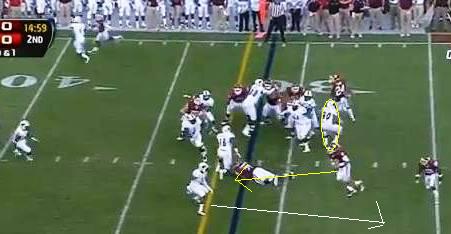 Our defensive end realizes he's made a mistake and puts on the brakes but he's too far removed from the play at this point to be a factor. The linebacker pans out on Finch to take him out of the play and trusts the safety to come up on the quarterback. This leaves a lane for Knight to run through and he easily gets the yard needed for the first down. 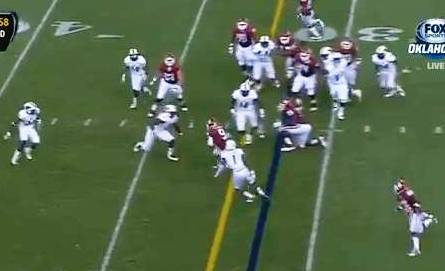 Knight ends up gaining five yards on the play but he's easily three yards off the line of scrimmage before he draws his first contact.

That's an example of how the zone read is run but the question is, does it work? The answer, through two games, is emphatically yes!

According to stats from the Charting Project at Football Study Hall Oklahoma has a higher average on zone read plays than other running plays. ULM's defensive end consistently crashed on the running back, leaving Knight free to keep the ball and run. Knight ran for 103 yards in the game and averaged 7.9 yards per carry. West Virginia did a better job at defending it by leaving their linebacker over to shadow the quarterback. The result was more hand-offs to the running back but still averaged 6.0 yards per carry before exiting the game with a knee injury.

We can look for Oklahoma to continue to add new wrinkles to this play because of the amount of success that they've had. I would expect there to even be a pass option added in the near future.