Happy, Happy, Happy! The Big Twelve Is All Smiles Just Weeks Before Kickoff

Everyone loves the preseason because everyone is in first place.

Share All sharing options for: Happy, Happy, Happy! The Big Twelve Is All Smiles Just Weeks Before Kickoff

If you've been around college athletics long enough then surly you've seen two mascots go at it. In some sort of sick and twisted over sized bobble head type of way, the mascots are often the vent of the frustrations that fans feel when their team's hopes of achieving their season goals are flushed down the drain of mediocrity.

Its just the opposite in the preseason though. Earlier this month at the Big Twelve media days, school mascots were posing for pictures with each other and moving around the building together in what seemed to be a scene from a Tim Burton movie. Don't be fooled though. The Mountaineer and Pistol Pete won't hesitate to draw on each other with their cap guns, while Boomer and Sooner stampede over them with Willie the Wildcat just waiting to pounce (good or bad, Bevo just stands around chewing cud). It can all turn south quickly just after kickoff and the utopia disappears.

With the season a little more than three weeks away from getting started, every team in the Big Twelve has a reason to smile right now. In addition to them all being undefeated, they've got individual reasons to be optimistic. Some of them are even legit. 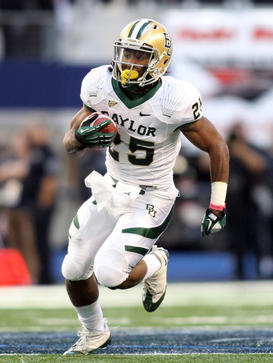 Lache Seastrunk may be the most explosive running back in the Big 12 (Photo:USA Today Sports)

Baylor - The Bears are the mystery of the Big Twelve this season. There are legitimate arguments for Baylor being anywhere from a front-runner to a middle-tier spoiler. There are serious concerns regarding the defense and a question mark, or two, at the quarterback position but there isn't a Bears's fan who doesn't smile at the though of Lache Seastrunk. His speed and explosive acceleration make him one of the best backs in the Big Twelve, if not the absolutely best.

Iowa State - Paul Rhodes is entering his fifth season as Iowa State's head coach and you have to be impressed with his track record. There is a lot of buzz around quarterback Sam Richardson and for the first time in several years, the Cyclones seem to be set at quarterback going into the season.

"I said, have you looked at that pile of crap out there? Have you taken a look at that? So if you don’t think you can play here, where do you think you can play? It’s a pretty simple approach. And that’s not a sales pitch. That’s practical. You’ve seen it, right? Unfortunately, so have I." -Charlie Weis to reporters at Big 12 Media Day

Kansas - Charlie Weis has a great sense of humor going into second season as the Jayhawks head coach. When speaking at the Big 12 Media Days, Weis was brutally honest about his sales pitch to high school recruits.

Things have been bad for Kansas football for a half a decade now but Jayhawk fans can always take solace in the idea that it can't really get worse than it was last season.

Kansas State - There isn't a greater miracle worker in the Big 12 than Bill Snyder. KSU fans should be overjoyed just at the fact that the man is willing to literally dedicate the rest of his life to being the Manhattan Miracle Man. No one ever sees the Wildcats coming, but they struck out of no where to the conference in 2003 and were back at it in 2012.

K-State is certainly flying under the radar in 2013 and Wildcat fans know that's when they're the most dangerous.

Oklahoma - The Sooners look to be explosive once again on the offensive side of the ball. They have four returning starters on the offensive line, returning talent and speed at the receiver position and a deep stable of running backs led by seniors Damien Williams and Brennan Clay. A foot injury to quarterback Kendal Thompson pretty much ended the quarterback race and put Blake Bell in the driver's seat, although redshirt freshman Trevor Knight appears to be holding his own in camp. Regardless, the future looks bright for Oklahoma's offense. They certainly need it to until the defense comes back around.

"I don't want to put any pressure on anybody," senior receiver Tracy Moore said. "But in my opinion, this is one of the best teams going into the season that we have ever had here, so I don't see any reason why we wouldn't be able to break another record." -Tulsa World

Oklahoma State - The Cowboys are the preseason favorites to win the conference for the first time since the Big Twelve conference was formed. That should be enough to make OSU fans smile all by itself but add twenty returning starters and the Pokes are looking at breaking records for the second season in a row. That's just not the opinion of the fans, just listen to what receiver Tracy Moore has to say.

TCU - The Horned Frogs were missing a key element to their success in their inaugural Big Twelve season. Quarterback Casey Pachall has returned to the team now, after getting his off-field issues cleared up, and is looking to return the Frogs to their pre-Big 12 form. TCU possibly has the best defense in the conference and one of the Big Twelve's most experienced quarterbacks. A season opener against LSU is looming large things are already warming up between coaches Gary Patterson and Les Miles.

''I'm more confident this team will be the best one we've had in the last two years or three years,'' -Mack Brown

Texas - The Longhorns haven't been relevant on the national scene since 2009 but this could be the year that puts them back into the forefront of the Big Twelve. They have a plethora of returning starters on both sides of the ball which has put much of the media on their bandwagon, and as usual Mack Brown is driving.

Everything in Austin revolves around the improvement of quarterback David Ash. While there's no shortage of skeptics as to his ability to lead the team to a conference title, there's also a growing list of supporters and believers. None more than Brown, who hasn't shown this much confidence in the preseason in quite some time.

Texas Tech - To say that Kliff Kingsbury has been a breath of fresh air to West Texas is a massive understatement. The Red Raiders may not be the kings of the conference in 2013 but bring back one of their own will help the program to heal up some old wounds and set a course that could return them to the apex they experienced less than five years ago. 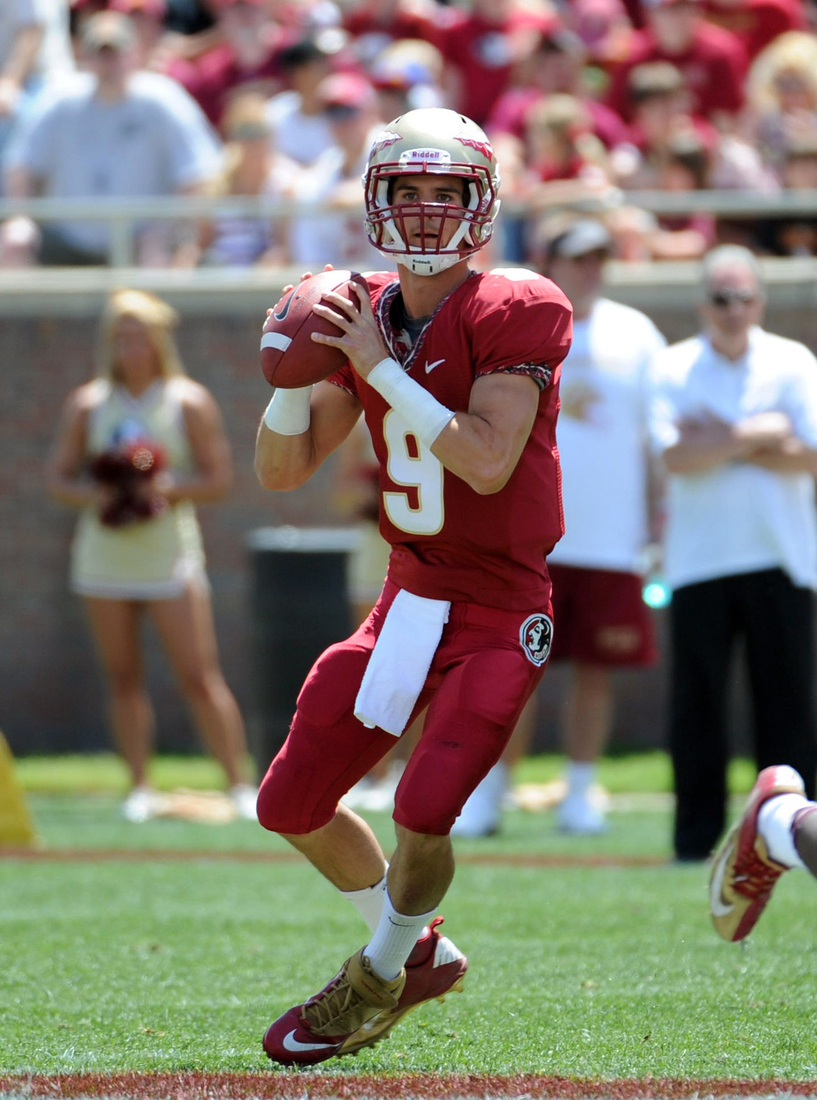 The transfer of Clint Trickett gives Dana Holgorsen the option of having an experienced quarterback (Photo:USA Today Sports)

West Virginia - The Mountaineers were explosive last year when it came to offensive football. However, their defense cost them dearly.The spring didn't necessarily bring any answers to the defensive woes and the majority of the offensive firepower was drafted into the NFL.

Not willing to be left in the lurch, Mountaineer head coach Dana Holgorsen was able to snag Florida State transfer Clint Trickett. Serving as a back up to EJ Manuel, Trickett was able to get some significant game minutes for the Seminoles, including two starts. While he's not guaranteed a starting spot (he's battling Ford Childress and Paul Millard_ he does give Holgorsen the option of putting a seasoned veteran quarterback in control of his offensive attack. While the addition of Trickett doesn't answer off of WVU's questions, it puts an experienced quarterback on the field with experienced running backs. That's a step ahead of where they were in the spring.