The Sooners leave in two weeks for a European tour, which gives us an early look at Coach Kruger's 2013-14 squad

Going into his third season at Oklahoma, Lon Kruger faces his biggest transition in player personnel. For this reason alone the Sooners trip to Belgium and France comes at a great time. Teams are allowed to travel once every four years to play summer exhibition games and the Kruger will watch his squad face off against five teams from Europe's top two professional divisions. While the trip itself will help provide answers to some of Oklahoma's questions, the two weeks of summer workouts leading up to the trip give us a glimpse as well.

Who Becomes Oklahoma's Inside Threat?

The easy answer here is Ryan Spangler. An Oklahoma native (Blanchard) who initially committed to Gonzaga out of high school, Spangler sat out last season after transferring back to play for the Sooners. At 6-8/227 he's going to give up some height to some of the conference big men but he's thick enough to bang around under the basket and athletic enough to create his own shot off the dribble and move freely in transition.

Forward D.J. Bennett sat out last season for a redshirt, after transferring from Indian Hills (Iowa) Community College. At 6-8/210 he's another big body that Kruger can put under the basket, but he'll be much more of a defensive presence and rebounder than a scorer.

Multiple times in Tuesday's practice Neal floated outside and hit a three-point shot.

Tyler Neal looks to be emerging into a hybrid inside/outside guy. At 6-7/229 he has the size to bang around underneath the basket but he also has very good ball handling skills for a big and has improved on his outside shooting. Multiple times in Tuesday's practice he floated outside and hit a three-point shot. 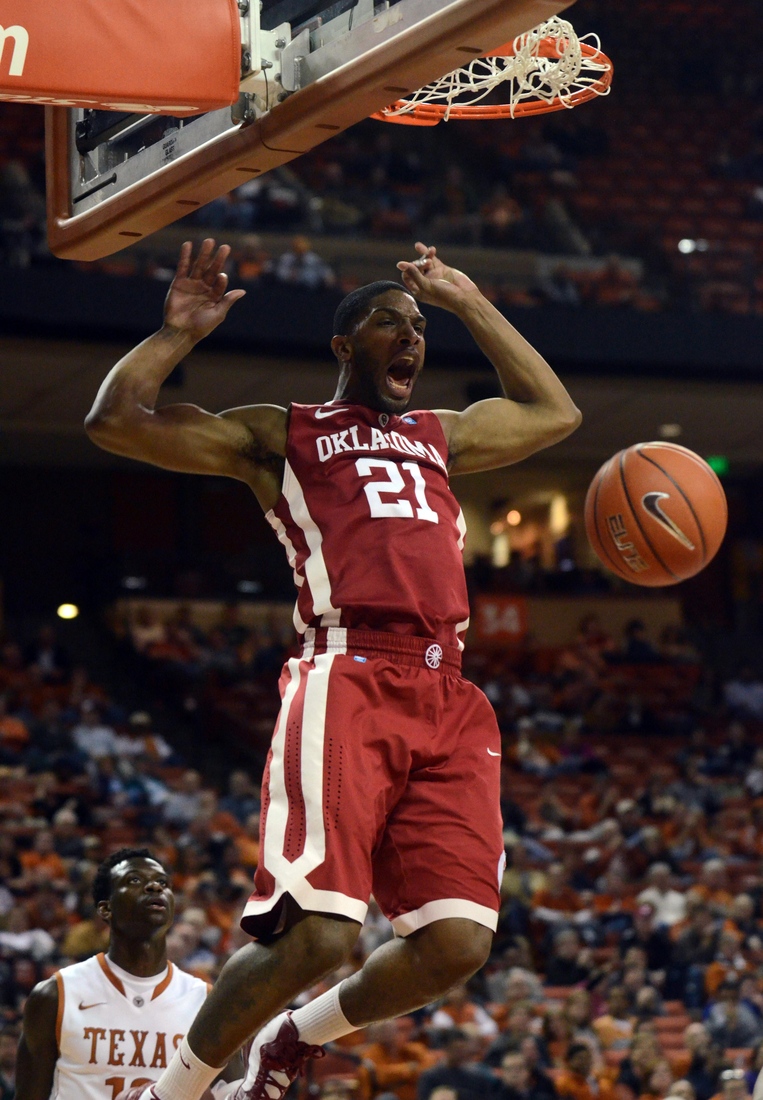 Clark has always been strong under the basket but needed to develop a mid-range game as well. (Photo: Brendan Maloney USA Today Sports)

Perhaps the best thing for the Sooners is that it appears that Cameron Clark has been working on his mid-range jump shot. He shot with confidence in practice and consistently nailed shots from ten to fifteen feet away from the basket. The most athletic of Oklahoma's forwards, Clark has always been strong under the rim but needed to develop a mid-range game in order to be a completely rounded player.

With Spangler eligible to play now, and D.J. Bennett's redshirt year completed, the Sooners are still down a player from the three that left following last season. That's where Sperry, OK native CJ Cole comes in. A 6-6/225 forward, Cole most likely won't draw any starts this season but he could end up providing some good minutes while keeping Oklahoma at the same frontcourt depth as last season. Regardless, they still won't have Romero Osby underneath the basket and there's still a bit of a mystery as to exactly how his points and rebounds will be made up.

Who Will Handle The Point?

Grooms told me after practice that he's heading overseas to play ball and is waiting while his agent works things out.

While Sam Grooms sat on the sideline and watched his old teammates, Coach Kruger was working on finding his replacement. (Grooms told me after practice that he's heading overseas to play ball and is waiting while his agent works things out.) Freshman Jordan Woodard appears to be the future of the point guard position at Oklahoma but as far as the present is concerned he appears to be a little more than a step behind Je'lon Hornbeak. Both Hornbeak and Woodard ran the point through practice with Hornbeak having a clear edge in the speed of the game and a grasp of the offense. I'm not coming anywhere near to writing off Woodard (especially after only seeing him in one practice) but I am saying that Hornbeak is clearly the better point guard at this point.

Buddy Hield and Isaiah Cousins ran at the two guard position and while both appeared to have improved from their stellar freshman campaigns, Hield seems bent on being a guy who can score consistently from anywhere on the floor. He shot, and made, multiple three-pointers and mid-range jumpers and he also rocked the rim with a two-handed jam after driving in from the left side while Oklahoma was working on their half-court offense.

Who Was The Most Impressive Newcomer?

Booker is a spot up guy from outside. (Photo: Matt Hofeld SBN)

Physically Woodard already looks the part of a college basketball player but, as already stated, he has some work to do to prepare for this level of competition. The best looking player on the floor, who wasn't with the team last year, was freshman guard Frank Booker from Augusta, Georga. At one point, during warm-ups, I counted seven consecutive three-point baskets that he made. He's a guy who likes to hang around at the arch and spot up for that dagger shot. If there was a guy primed to fill Steven Pledger's shoes it has to be this kid. He's an under the radar type player who is still developing his all-around game (much like Pledger when he arrived on campus) but has a sharp shooter's touch and can be deadly from outside.

The Sooners play their first game on August 8 in Belgium. They will play a total of three games there before heading to France for the final two games of their tour.