OU Baseball Limps Their Way Into Big 12 Tournament & A No. 4 Seed

Share All sharing options for: OU Baseball Limps Their Way Into Big 12 Tournament & A No. 4 Seed

UPDATE: Due to the tragedy in Moore, the Big 12 Conference has decided to alter the format and push back the start of the postseason baseball tournament. You can find all of the details here courtesy of the league website. Relevant to OU Baseball, the Sooners' game against Baylor has been moved back to Thursday but will still start shortly after 9:00 a.m. (CST).

After a disappointing series this weekend in Manhattan, the Oklahoma baseball team limps into postseason play facing the very real possibility of having to win the Big 12 Tournament for a shot at an at-large bid into the NCAA Tournament.

As a "reward" for their late season collapse, the Sooners have fallen to a No. 4 seed in the Big 12 and awarded the ultra attractive opening game time slot of 9:00 a.m. (CST) on Wednesday.

Their opponent will be the Baylor Bears who Oklahoma beat twice in last year's tournament on their way to the final, but Baylor won the regular season series against the Sooners this past season.

Here is the full bracket: 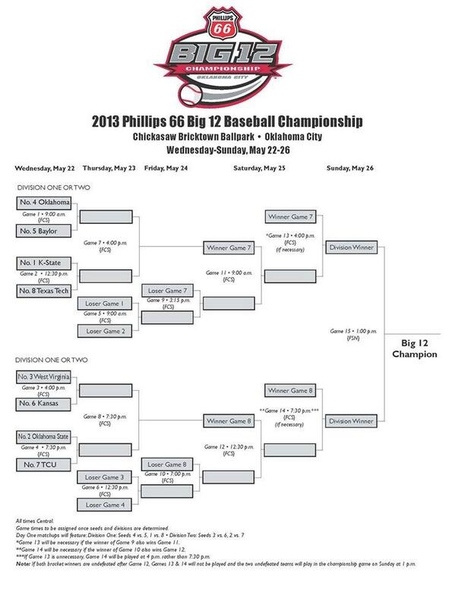