After an opening round win over Central Michigan, the Oklahoma women will have a chance for some revenge as they take on a UCLA team who beat them earlier this season.

The two teams met in OU's second game of the season and while the while score of 86-80 would seem to indicate a close game, those who remember watching the game know that score is pretty misleading. Oklahoma did not play well and looked slow against a more athletic Bruins squad. To be fair, it was very early in the season and the Sooners were still trying to figure out who they were after losing two players in the preseason who were expected to contribute.

However, on the flip side of that coin is the fact OU also had both Whitney Hand and Maddie Manning both of whom have since suffered season ending knee injuries.

Even before their first round game, both Oklahoma players and coaches were talking about their desire for a rematch with UCLA. It's clear they feel as though they did not play well and want a shot at redemption.

They'll get their chance for exactly that Monday night in Columbus, Ohio with the tip scheduled for 6:15 p.m. (CST). As you can see from the coverage map below, if you live in Oklahoma or California you can watch on ESPN2. Otherwise, the only way you'll be able to see the game in its entirety is online via ESPN3. 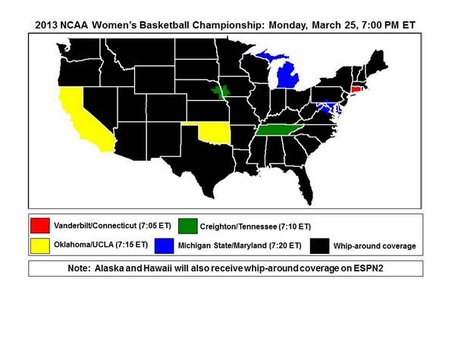