Alabama's offensive line has only allowed quarterback AJ McCarron to be sacked 10 times this season.

Any offense is only as good as their offensive line allows them to be and there's a reason why Alabama is one of the best teams in the nation. The Tide offense averages 449 yards and 38.8 points per game, quarterback AJ McCarron is completing 67% of his passes and Alabama is rushing for a team average of six yards per carry. Its all fueled by what they do upfront where they average 6-5/308 across the line. 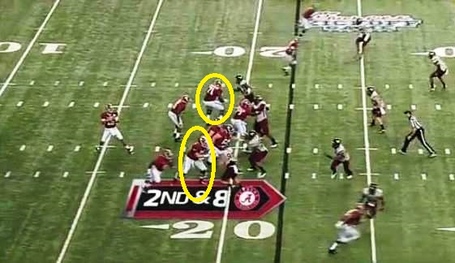 They have a great first step back in pass protection. Notice where the line of scrimmage is (black line) on this play against Virginia Tech and the tackles have yet to engage in blocking the ends. This allows them quickly form the pocket, drive crashing ends further out, and give McCarron wider passing lanes.

The Hokies only rush four on this play and don't even get close to McCarron before he throws. The defensive ends are seven and eight yards from the line of scrimmage which gives the quarterback plenty of room to step up into the pocket if he needs to buy an extra second or two. Notice that McCarron is back far enough from the line to throw down the middle, if he wants, and also has clear passing lanes to his left and to his right. Alabama's offensive line couldn't have blocked this play more perfectly. 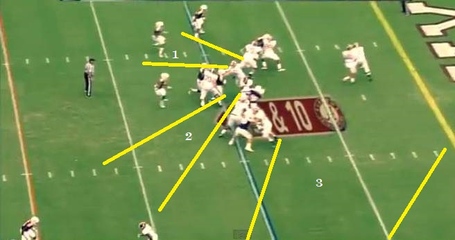 They are physical enough to move their defensive counterparts around enough to create efficient running lanes. This is a draw play against Texas A&M where TJ Yeldon has three lanes to choose from, including a gaping lane to the left. Its no wonder this ended up being a big gain for Alabama.

The question mark on the offensive line is at the right guard position where senior Anthony Steen is out. Its still unclear as to who will replace Bama's all-conference guard but its not feasible to think that they can lose a starter of that caliber and still perform at the same level.

I don't think that Oklahoma will have the ability to overpower Alabama's offensive line so the best way to attack them is with speed. The Sooners are going to have to get bigger on the ends which means that Chaz Nelson and PL Lindley will see more playing time and gives them room to get creative with how they'll use Charles Tapper. Regardless of where they line up, they'll have to be quick off the ball in order to have any chance at winning the battle up front.