Has Oklahoma Found Their Power Running Game In Damien Williams?

Share All sharing options for: Has Oklahoma Found Their Power Running Game In Damien Williams?

The Oklahoma Sooners have been searching for a short yardage back for several years now. Last season, the thought was that Dominique Whaley had filled that role on this squad with a plethora of backs. However, the Sooners continued to suffer in the redzone. That was until the implementation of Blake Bell in the Belldozer formation. While it is widely known that the Belldozer is a dynamic set in this offense, a running back, waiting in the wings, could emerge as not only the premier back but also the go to guy on short yardage downs.

According to SoonerSports.com, Oklahoma's JUCO running back Damien Williams had this to say about his ability.

"I like to get the hard yards. I don't even think about my touchdown. I'm more of a down-hill guy. I weigh more [than the other OU backs] so I can kind of get after [defenders] a little more."

On Saturday night, in a late game on the Dark Side of the Moon, or more commonly known as El Paso, against the UTEP Miners, Damien Williams had the chance to prove himself and prove himself he did. He ended the night with 104 yards and a score on 9 carries giving him the title of Oklahoma's top rusher for the game. While his TD run was a highlight, it doesn't show why he is the next power runner. 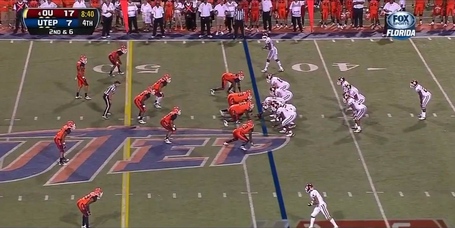 In the fourth quarter, the Sooners utilize the fabled Triangle Diamond Formation with Damien in the backfield. Eventually he will get the handoff from Jones as the two others open up a hole for him to run through. What happens next is nothing short of impressive.

After bursting through the line nearly untouched, Damien is met by two DBs right at the 50 yard line. He is instantly met by the first DB who knocks him a bit off balance just before the second DB gets there. As the second one meets him, it would appear that Williams was brought down after a 5 yard gain. However, he plants his arm on the ground and uses it to regain balance as he stands back up.

The end result is gaining another 6 yards before the mob catches up to him.

Not only does Damien exhibit the ability to run between the tackles, he showed that he can absorb numerous hits. This puts him in a category of his own on this Oklahoma squad. Being the biggest back on the roster has it perks. It would appear that he can take the punishment while continuing to carry the ball time after time. With the want and drive to get after defenders, Williams has proved he can be the power back the Sooners are looking for. The question is, will the coaching staff let him be that for this team?