Oklahoma Football: A Study Of Linebackers And Gap Responsibility

Share All sharing options for: Oklahoma Football: A Study Of Linebackers And Gap Responsibility

Middle linebacker Tom Wort is tied for the lead on Oklahoma's defense with twelve total tackles and fellow linebacker Corey Nelson isn't too far behind with seven. However, through the first two games of the seasons it has been the linebackers that have drawn a little bit of criticism, not because of their performance but because of confusion among the fan base about what they're supposed to be doing.

We're somewhat spoiled to Sooner linebackers flowing to the ball and attacking ball carriers down hill. Brent Venables was a defensive coordinator who loved his linebackers and produced guys like Torrance Marshall, Teddy Lehman, Curtis Loftin and Travis Lewis. His system revolved around the linebackers and made them the centerpieces of defensive success. The Venables system is gone now but Oklahoma, under Mike Stoops, is still relying on their linebackers to make the defense work...just in a different way.

Travis Lewis led the Sooners in tackles for four consecutive seasons by reading the play, pursuing it and then making the stop. Tom Wort doesn't quite have that much freedom. Instead of following the play from sideline-to-sideline he is instead responsible for a gap along the offensive line. It doesn't mean that he can't lead the team in tackles (obviously he's proving that), it just means that the stops in 2012 will be more evenly spread out.

For those who may not know, a gap is simply the space in between the offensive linemen. There are three on each side of the center, lettered A, B, & C. When a linebacker draws a gap assignment it means that he is responsible for filling that space, should the play come that way. This is, in short, what Tim Kish and Mike Stoops are doing with Oklahoma's linebackers. It makes the read and reaction time much shorter and allows the linebacker to get to the play quicker. Here's an example from last week's FAMU game. 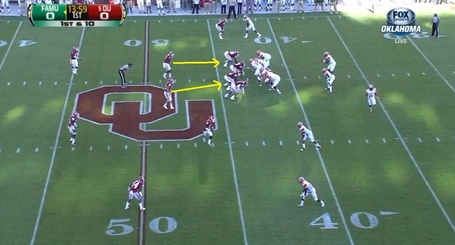 On this play the defensive tackles are taking up the A gaps and the defensive ends have the C gaps. This leaves Corey Nelson (top) and Tom Wort (bottom) responsible for the B gaps which is the area between guards and the tackles. Another thing to notice here is that Oklahoma has their linebackers seven yards off the ball instead of the typical five. This will help them defend the underneath pass that typically attacks the linebackers across the middle 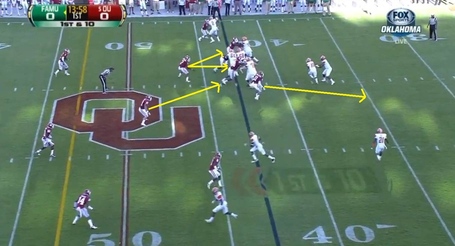 The flow of the play takes it to the left side of Oklahoma's defense so Nelson has stepped up to make a read and fill his gap. Both defensive tackles are being double-teamed so Nelson is reading both A & B gaps right here. The idea here is to force the play to bounce outside where Nelson can still pursue but will also have the support of free safety Tony Jefferson.

On the bottom side (right side of the defense) end R.J. Washington is left untouched and has the responsibility of containment. If he crashes in to pursue the running back then FAMU quarterback Damien Fleming will keep the ball and try to get outside of Washington and down field. Since Washington plays the contain properly, Fleming has no choice but to give the ball away. Otherwise he's looking at getting tackled for a substantial loss.

Now, here's the difference between last year and this year's linebackers. Notice that Wort is still hovering around seven yards off the line of scrimmage. The reason why is that he's still reading the play and keeping his gap. Should Fleming decide to keep the ball he could try to go inside of Washington (to the B gap) and Wort would be there to clean it up. In last year's defense Wort would have already turned his hips and started moving towards the top in pursuit. This would have left Washington alone to make the play should the quarterback keep the ball. 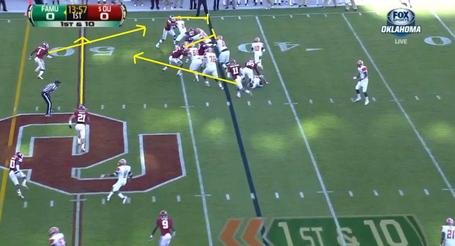 The pursuit angles on this play are great and because of that it never really stood a chance at working. Because they are now certain that the ball is out of Fleming's hands both Wort and Washington go into pursuit. Because he got sucked in on containment, Washington has to take an angle diagonal to the sidelines that would bring him to the edge of the field around the 50. However, because Wort was able to stay back he can turn his shoulders and run directly to the sideline. Had the running back been able to get past the first wave of defenders then he certainly would have been stopped at the 50 by Wort and Washington.

Nelson and corner Demontre Hurst were were able to make the tackle after a gain of less than a yard because the flow of the play took it all the way outside. Had they not been able to get to the running back then Jefferson would have stopped him after a gain of about two yards.

The reason this play worked so well for the defense is because of gap responsibility. Nelson's presence in the middle caused the play to get strung out which allowed time for Hurst to get off of his blocker and make the stop along with Nelson. That's what Mike Stoops is looking for! Not linebackers that run down hill into the play but guys who can help dictate where a play goes and then make the stop when the meet the ball carrier.