Share All sharing options for: Big XII Quoteboard - Conference Is No Longer Perfect

It had to happen at some point. The Big XII wasn't going to make it through the entire non-conference slate unblemished. I just don't know that anyone expected Rice and Arizona to be the first teams to hand out losses to Big XII schools.

Kansas has to rebound quickly as they prepare to participated in the first conference game of the season against a TCU team that looks pretty dang impressive. O-State will try to get things corrected at home this weekend in their game against Louisiana-Lafayette. Despite scoring 38 points last Saturday night, the Cowboys still lost by three touchdowns. That pretty much indicates there's some issues on the defense, right? Well...at least that's what you'd think.

And while the offense was busy stumbling, the defense held Arizona to 3 consecutive FG's (2 of which came on short fields) and a punt. Despite not creating a single turnover (Az fumbled once and recovered), the defense held 3 drives to FG's, forced 4 punts, and 1 turnover on downs. Eight of the Wildcats drives resulted in 9 points, and I'm not even including 2 more forced punts on Arizona's first two drives of the 4th quarter. - Cowboys Ride For Free

Coming off a bye week, Our Daily Bears didn't have any Baylor football to talk about from the weekend. Or did they?

Based on the results from his incredible debut game this past week against the Saints, Baylor's own RGIII has been named the NFC Offensive PoW for Week 1 in the NFL. Redskins fans are understandably excited about both the results so far and the notoriety their historically-downtrodden franchise has received therefrom. I'm excited for them. - Our Daily Bears

Confession time: After watching RGIII light up the Sooners last season and beat them with a pass on the final play that I'm still quite certain was an impossible throw I tried to hate Robert Griffin III. The problem is that I just can't because he's such a terrific athlete and overall good dude. I was happy to see his performance on Sunday.

Ladies and gentlemen, we're seeing the Iowa State Cyclones growing up before our very eyes. ISU is 2-0 to start the season with one of those wins over instate rival Iowa. Are they satisfied? Absolutely not!

So let's start with this question: is it too early to start wondering what Courtney Messingham is doing?

Before you immediately answer that we need to start reading a little bit between the lines to discuss what the offense is doing well, what it's not doing well, and what it's doing terribly. It's hard to criticize an offense that racked up 441 yards of total offense against Tulsa and 342 against Iowa in Kinnick Stadium. At this point the only real argument that I have is that this team lacks something that the early 2011-12 men's basketball team did: a killer instinct. - WRNL

TCU has opened their new stadium. Take a good look Oklahoma fans because this is where the Sooners will close the 2012 season. 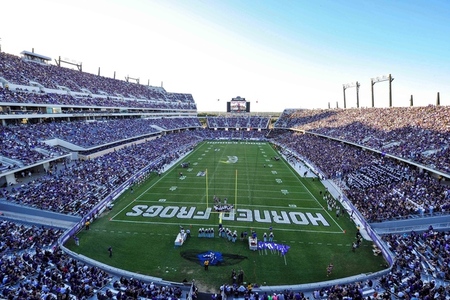 Kansas won't be playing in that new stadium this season, as TCU is traveling to Lawrence this weekend, but they are preparing for the purple plague of the Frogs.

TCU is coming off of a blowout win over Grambling in week one and this week figures to be their first true test...if you can call it that. TCU played 12 true freshman and doesn't quite have the same look that it was expecting due to some unforeseen issues, but they are still a very solid team and Gary Patterson is going to be a tough individual to coach against in the Big 12. - Rock Chalk Talk

Not only are the Texas Longhorns undefeated on the season, they're also moving the ball on offense and scoring points. One of the reasons may be the play of the receivers...but not in the aspect of them catching the ball.

There for a little while, catching a Texas Longhorns wide receiver blocking downfield was about as likely as catching a Yeti on film.

A couple of those guys on the 2010 may have professed an allergy to the task if asked. Or noted that they came to Texas to catch passes.

The addition of wide receivers coach Darrell Wyatt after the 2010 season has sparked an increased emphasis on the blocking game for the position group in the running game and the passing game.

How much of an emphasis? Well, senior wide receiverMarquise Goodwin won the Offensive MVP award after only registering two catches for 15 yards against New Mexico. And it wasn't for those two catches either. - Burnt Orange Nation

West Virginia is back in action this weekend to play James Madison. Ummm...not much else to see here folks, move on.

West Virginia takes on a potent JMU team that has put up 55 and 42 points in the last two games. The neutral site game at FedEx Field gives WVU an opportunity to showcase itself to the DC/Metro area recruiting talent as well as a fan friendly game for the many alumni in the area. It certainly doesn't hurt that Dan Snyder has guaranteed WVU a 2.3 million dollar payday to play in his sandbox this coming Saturday. - The Smoking Musket

How do you attack a New Mexico team that just got dismantled by Texas? Oh, trust me, there's a way.

You absolutely saw this against Texas St. and it was maybe good to see Texas Tech get a game against Texas St. Granted, these are really two different offenses, New Mexico's is more of a veer and triple-option look. Still, last week against NM, UT had 8 tackles for loss but only 1 sack. I think that Texas Tech played it relatively safe against Texas St. so it will be interesting to see if DC Art Kaufman dials it up a bit or plays it safe yet again. I think the gamble in dialing up the pressure is that you're not going to have as good of gap-control along the line and that could lead to some big plays. I'd also mention that even against UT's really good defense, New Mexico ran the ball for 206 yards on 47 carries for an average of 4.3 yards per carry. The Lobos will run the ball, there is no doubt about that and they will gain yards. - Double T Nation

Oklahoma has something special in running back Damien Williams. Some people knew it as soon as the JUCO transfer made his pledge of allegiance to OU in last spring's signing class. Others picked up on it when he ran for 104 yards on 10 carries against UTEP. For others it may have been last Saturday when he produced the greatest performance ever for a Sooner running back making their home debut by carrying the ball ten times for 156 yards and four touchdowns.

If you were to take a look at the Big XII rushing statics you'd notice that Williams leads the way in rushing yards (259), yards per game (129.5), yards per carry (13) and rushing touchdowns (5). What's crazy is that he's managed all of that in just 20 rushing attempts. Yup, one fourth of his carries have gone for scores. - Crimson And Cream Machine

Kansas State is the next opponent on Oklahoma's schedule and it looks as if they'll be bringing a dark horse candidate for the Heisman to Norman.

Yes, it's only been two weeks and Collin Klein is still a dark horse candidate, but after his masterful performance on Saturday it's time to take a closer look at where he stands in the Heisman race and how he could win. Much like the Daniel Thomas Heisman Watch at Ahearn Alley two years ago, this feature will continue each week unless the CK for Heisman train runs completely off the tracks with no chance of getting back on.

Geno Smith appears ready to provide some tough competition within the conference, and it's not going to be possible to keep up with Matt Barkley'sridiculous pace (10 TDs in 2 weeks!). On the bright side, the Pac-12 had a great week (9-3 with 3 upsets of top 25 teams) so maybe someone other than Oregon will challenge the Trojans and their quarterback after all. We may find out when they play at Stanford Saturday. - Bring On The Cats