Oklahoma has something special in running back Damien Williams. Some people knew it as soon as the JUCO transfer made his pledge of allegiance to OU in last spring's signing class. Others picked up on it when he ran for 104 yards on 10 carries against UTEP. For others it may have been last Saturday when he produced the greatest performance ever for a Sooner running back making their home debut by carrying the ball ten times for 156 yards and four touchdowns.

If you were to take a look at the Big XII rushing statics you'd notice that Williams leads the way in rushing yards (259), yards per game (129.5), yards per carry (13) and rushing touchdowns (5). What's crazy is that he's managed all of that in just 20 rushing attempts. Yup, one fourth of his carries have gone for scores.

However, its perhaps what you haven't noticed that is helping Williams turn heads in the Big XII.

There's no doubt that Williams is talented. He's flashed his brilliance for two games now and Oklahoma fans are hungry to see more. He's a big (6-0/208) power back that possesses terrific speed and but what has spurred him to stardom through the first two weeks of the season is the schemes the Sooners are using him in and the blocking he's getting upfront. Here's an example. 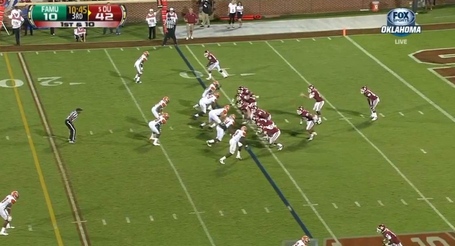 With freshmen wide receivers Durron Neal and Trey Metoyer lined up at the top and bottom as the wide receivers, Oklahoma is in a power formation with a tight end on the left as well as a fullback on the left. A combination of superb blocking, power and breakaway speed is about to spring Williams for an 89-yard score. 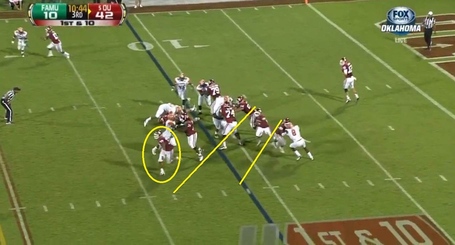 A terrific seal block by the tight end, along with complete dominance by the offensive line, not only creates the perfect running lane for Williams but also frees the fullback to go into the second level of the defense untouched. It will be Millard (fullback) who sets the final block that springs Williams free to go the distance. 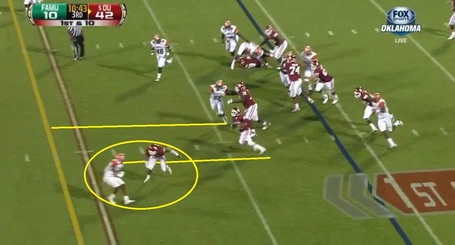 Eight yards from the line of scrimmage Millard makes his first block on the play. In doing so he takes out the only FAMU defender who is in position to make the tackle and keeps the lane open for Williams to keep trucking. At this point Williams has had the ball in his hands for about seven yards and has yet to be touched. 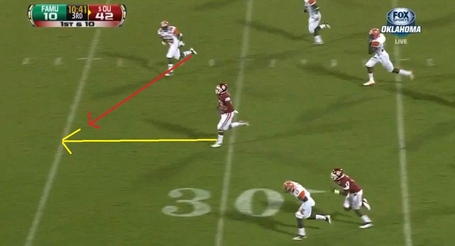 From this point on its up to Williams. All he has to do is outrun the defender to the 35-yard line and he removes the angle that the defender has on him. Turning on the burners, Williams does this with relative ease and the next player to touch him will be teammate Trey Metoyer who celebrates with him in the end zone. This entire play took just eleven seconds to develop and go 89-yards.
We've seen Williams create plays on his own by plowing over defenders and moving the chains but here we see him set up his blockers, read them and then use his speed to spring to pay dirt. The ability to do both of these is what makes him the best running back in Oklahoma's stable and possibly even the Big XII. Its also the reason he will ultimately supplant Dominique Whaley as the starting tailback. Through the first two weeks of the season he's averaging ten carries per game. I would expect to see that number rise when the Sooners host the Kansas State Wildcats on the 22nd.