Share All sharing options for: First Book To Detail The Red River Rivalry From An Oklahoma Viewpoint Released 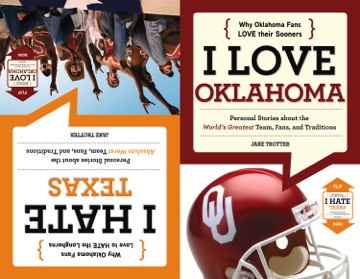 The Oklahoma/Texas Rivalry truly is a love/hate relationship. OU fans love their Sooners and have a deep lasting hatred for all things Longhorn. In his new book, titled "I Love Oklahoma/I Hate Texas" Jake Trotter highlights the Red River Rivalry from the Oklahoma viewpoint for the very first time. Trotter is no stranger to us here at CCM. He's one of the most respected Oklahoma football writers around and has built a loyal following from his days with the Oklahoman to his current work at ESPN's SoonerNation.

Because Jake is a fan of CCM (and all around cool dude) we were able to get an excerpt from the book, exclusive to Crimson And Cream Machine.

In Oklahoma, they're known as the "four Bs." As in Bennie, Bud, Barry, and Bob. But take out Jim Mackenzie, and there wouldn't have been a Barry. And OU probably wouldn't be the program it is today.

In 1965 OU football was in turmoil. Gomer Jones, who had been at the ground floor at the building of the Sooners dynasty as Bud Wilkinson's most trusted assistant, gracefully resigned after only two seasons as head coach following a 3-7 season. The Sooners turned immediately to Texas coach Darrell Royal to resurrect the program, offering Royal a lucrative six-year contract that would pay him $32,000 annually. But Royal, who grew up in Hollis, Oklahoma, then starred for Wilkinson in the 1940s, declined. "There'd be something lacking in a person, I think, to grow up in a state and go to that state university and not have some feelings and loyalties," Royal would say. "But, on the other hand, I think there'd be something lacking in a person who could come here...and be as deeply involved as I was, and not have some emotions here, too."

Unsuccessful in getting Royal to join them, the Sooners were desperate to find someone that could beat him. The Sooners had lost eight in a row to Texas, which remains tied for OU's longest losing streak in the series. OU pursued Georgia's Vince Dooley, but was turned down again. Then the Sooners finally found their man.

Jim Mackenzie was a 1952 graduate of the University of Kentucky, where he was an all-SEC tackle playing for Bear Bryant. Mackenzie was on the team that ended OU's 31-game winning streak in the 1951 Sugar Bowl. After a brief stint coaching high school and junior college, Mackenzie joined Frank Broyles'staff at Missouri in 1957. The following year, he went to Arkansas with Broyles, who turned the Razorbacks into a national power.

Under pressure to make a quick hire so that recruiting wouldn't suffer, OU president George Cross decided to make a run at Broyles'right-hand man-though getting him to Norman wasn't easy. Day after day, Cross tried to call Mackenzie, but could never get anyone on the phone. Cross then realized he had been calling an Arkansas student with the same name who had gone home for Christmas break. Through Broyles, Cross finally got in touch with Mackenzie the coach, who agreed to interview for the job. Problem was, Mackenzie fell asleep on the way and didn't get off the plane in Dallas to make the connecting flight to Oklahoma City. When Mackenzie woke up, he was in Colorado Springs. Mackenzie called OU officials to apologize. Later, he jokingly said, "Well, I heard Royal didn't interview, and he was offered the job."

With him, Mackenzie brought a winning attitude and a star-studded coaching staff that would be the foundation of OU football for the next 25 years. Among those assistants were Chuck Fairbanks and Barry Switzer, future OU head coaches who were hell-bent on whipping the program back into shape. Immediately, Mackenzie and his staff attacked the recruiting trail like never before to restock the cupboard. In a matter of days, Mackenzie convinced future stars like fullback Steve Owens, ends Jim Files and Steve Zabel, and center Ken Mendenhall to attend OU. Mendenhall, an all-state star out of Enid, Oklahoma, had been leaning toward to Arkansas. But in one snowy night, Mackenzie changed his mind. "He called me after he had been named head coach," Mendenhall said. "I told him I had already made up my mind to go to Arkansas."

"Has your momma started supper yet?" Mackenzie replied. "Well, I'm going to get in my car now, and I'm driving up there." Mackenzie kept his word. He drove 100 miles through a sleet storm and took Mendenhall's family out to dinner at the Enid Holiday Inn. By the time dinner was over, Mendenhall was OU-bound.

"Frank Broyles wasn't going to drive through a sleet storm to get me," Mendenhall said.

Back in Norman, Mackenzie was instilling a similar intensity among the players. "The off-season program they implemented that spring was the most grueling we'd ever been through," said Bob Warmack, then OU's sophomore quarterback. "They didn't care if they ran people off-and they did. But those who made it through there were pretty much warriors."

Almost overnight, Mackenzie had transformed the mentality of the team. "He really did," said wideout Eddie Hinton, also a sophomore that year. "I wasn't used to losing, and I was very frustrated my freshman year. This wasn't the tradition of the school. I was thinking of maybe going elsewhere. But the first day, Coach Mackenzie said, ‘We're all gonna start on the same line. And we're going to win.'" Mackenzie understood he had to make his players feel like winners, too. He put carpet and lounging chairs in the athletic dorms. He also changed the helmet color from white to crimson. "He put us in the mindset we were going to be champions," Hinton said. Out of the gate, the Sooners rolled to convincing victories over Oregon and Iowa State, setting up the showdown with Royal's Longhorns. It had been seven years since OU scored more than a touchdown on Texas, but Mackenzie felt good about his club's chances. "The team is showing quickness, zip, and enthusiasm," he told the Daily Oklahoman the week of the game.

Mackenzie also had something up his sleeve, besides his usual pack of cigarettes, to ensure his team was motivated. Early in the week, a voice identified only as "Texas Rose" went on a Norman radio station and ridiculed the Sooners. KNOR claimed Texas Rose had pirated its frequency. Turned out, with Mackenzie's approval, the ploy had been a hoax. Texas Rose was an OU Pi Phi named Marty Nelson.

On the opening drive, Texas looked unstoppable, despite not having star quarterback "Super" Bill Bradley, who injured his knee the week before against Indiana. The Horns methodically drove to the OU3-yard line while also wilting six minutes off the clock. But on third down, Royal failed to send the play in on time, and Texas was flagged with a delay of game penalty. Andy White, Bradley's replacement, overthrew wideout Greg Lott in the corner of the end zone from the 8, and Texas had to settle for a field goal. The blunder by Royal proved to be a turning point. Granville Liggins and the Sooners defense dominated the rest of the afternoon, causing five turnovers. Warmack and the OU offense, meanwhile, got going. Late in the opening quarter, Warmackcaught the Horns napping with a pass in the flat to a wide-open Ron Shotts, who rumbled 27 yards to the Texas 24 before being thumped out of bounds. Shotts then blasted through the right side for 22 yards to the Texas 2. Two plays later, Warmack faked to Shotts, then broke around the right on a naked bootleg.

"I just tried to put the ball on my hip to hide the ball from the people on the perimeter," Warmack recalled. "There was a defensive end kind of spying on me, and he saw that I had it. But as he came up to make the tackle, I cut up inside and got into the end zone before anyone else could get to me."

Place-kicker Mike Vachon pulled the extra point left. But that would be his last miss. Vachon connected on a 31-yard attempt to give OU a 9-3 lead just before half. Then to begin the third quarter, he nailed a 43-yarder into the wind for the longest field goal in OU history. The Sooners led 12-3 going into the fourth quarter, and 15-3 after Vachon added a 20-yard field goal after Bob Stephenson's interception deep in Texas territory.

But for the first time since its opening drive, the Texas offense came alive. On third-and-10, White found Ragan Gennusafor an 18-yard strike to the Texas 42. White capped the drive witha two-yard scoring plunge. Even though the two-point try failed, Texas trailed just 15-9 with nine minutes go to despite being dominated for most of the game.

Warmack, however, answered with a 44-yard completion to the Texas 22, setting up one of the more bizarre back-and forth sequences in college football history. All OU needed was another Vachon field goal to put the game out of reach. Instead, Shotts fumbled the ball to the Horns, and panic cascaded through the crimson side of the stadium. But on the next play, Texas running back Jim Helms fumbled the ball right back to OU. Except then, two plays later, Warmack bobbled the snap, and Texas recovered.

Two plays after that, White was picked off by OU linebacker Rickey Burgess, who returned the ball to the Texas 27 before he fumbled. Fortunately for the Sooners, the ball rolled out of bounds. The final tally was four turnovers on four fumbles and one interception in just over four minutes.

With 3:41 to play, Mackenzie wasn't about to squander his good fortune again. After three conservative run plays, he sent in Vachon for the game-clinching field-goal try. And from 41 yards out, the toe-poker from Amarillo, Texas, split the uprights again to seal the win. The streak was finally over. Joyous players hoisted Mackenzie, Galen Hall, and Switzer on their shoulders and carried them away to the locker room.

"Now University of Oklahoma boosters can get excited about Jim Mackenzie's first football team," the Daily Oklahoman's Volney Meecewrote. "Undefeated, untied, and largely untested after early-season brushes with Oregon and Iowa State, the Sooners stunned favored Texas 18-9 Saturday and erased several doubts about their prowess by doing it more convincingly than the score-lovely as it was to long-suffering OU faithful-hinted."

Back in Oklahoma City, thousands of flag-waving Soonersfans showed up on the tarmac at Will Rogers Airport to greet the team. Police tried to keep the fans behind the fences but were unsuccessful. There, Mackenzie was presented with a congratulatory letter from Governor Henry Bellmon. "Congratulations to each of you on a great win," the letter read. "You could not have won any sooner or better."

This excerpt from "I Love Oklahoma/I Hate Texas" is printed with the permission of Triumph Books / www.triumphbooks.com.

Jake will be on our podcast, Sunday night August 19th, to discuss the book and Oklahoma's upcoming football season. You can also visit the book' s official FaceBook page for more information.