What Oklahoma Can Do To Help the Offensive Line

Share All sharing options for: What Oklahoma Can Do To Help the Offensive Line

"But OOOOOOO the offensive line losses … how can all that be overcome?"

How, indeed? With the losses of Tyler Evans and Ben Habern, not only have we lost a great deal of our experience, we've lost our interior depth. Folks, you need to accept that we are one or two injuries away from an 8 win season. It's that bad. So what can we do to help the boys in the trenches? I'll tell you my ideas....after the jump.

I get it. The hurry up offense gives us a unique advantage because of our wealth of talent at the skill positions. It also creates an escalating probability of an injury on the line. With our current personnel, the hurry up just doesn't make sense as a consistent offensive philosophy. We don't have a guy like Jermaine Gresham or even James Hanna to make DC's rethink their coverage calls. Hell, our TE's haven't seen the field at the D1 level.

When the hurry up is at its most effective is when you have versatile personnel. It's a Jimmys and Joes answer to an X's and O's question. How do you get a defense to react instead of attack? You put guys on the field who can do several different things well enough to make the defense pay for ignoring any of them. You put Roy Finch in the backfield and move him back and forth from the slot position. You put Trey Millard at FB, motion him to H-back tight end, or line him up as the 6th man on the line for a surprise look. That's an advantage we can use situationally, but not on a regular basis.

We need to keep the hurry up, and use it frequently when we've got a personnel mismatch we can exploit. However, I do not think it's a wise base concept with a paper thin offensive line.

The ball cannot be in Landry's hands more than a two and a half count against elite defenses. Against teams like Texas and TCU, he'll be getting hit when he gets to three.

This is not a damning of the OL. Quite the opposite, I think our starting 5 is still as good or better than any in the conference. But Diaz and Gary Patterson live and die on getting to your QB quickly. Both have DT units whose 2012 ceilings are between decent and good (read: not true liabilities, but not worrisome either), but both are also extremely inventive about how they get to your QB. Texas, in particular, has a lethal DE tandem.

3) Get creative with the running game.

The diamond formation was incredibly useful with Trey Millard because we have a 260 lb fullback who runs a legit 4.6 flat. The quick draw was usually good for 3-5 yards, and it forced the linebackers to stay home instead of overplaying contain. What's more is that he's an exceptional blocker with good hands. From the diamond, we can move Millard to H-back, Finch to the slot, and snap the ball from a very different look than we broke the huddle from.

Another option is the quick reverse. Unlike the jet sweep, where the slot man in motion is the guy getting the ball, the quick reverse uses the motion to get the defense overloaded on the backside of the play. A great example is provided by smartfootball.com: 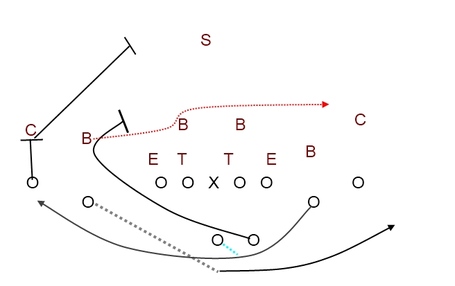 The motion man is a decoy, and a speedy slot guy (let's say, I don't know, Roy Finch or Durron Neal) can easily get 15-20 yards off of this against anyone. This is just one play, but the concept is simple. Get the defense going one way, and let your athletes make plays in space. It's not anything special to OU, either. Rare is the defender who can be left alone against a high-end a-fo-leete (read: guy who runs 4.4 or better and has great feet/balance) and not lose that battle.

Another option was exhibited in practice tape shown here at the 1:42 mark:

Now somewhat famous walk on FB Aaron Ripkowski, noted for his exceptional blocking in the Belldozer package, lines up as an I-formation FB, with Trey Millard at TB. While we lose speed, we gain a size advantage. Millard can be run down from behind by faster DB's, but he's a bear to tackle. Ripkowski isn't going to get whipped physically by anyone. You'll go around him or get stuffed. Millard is shockingly nimble for 260 (see his 65 yard TD run against K-State for evidence). This is a formation that can get running yards against bigger run defenses. It makes situations where a 230 or 240 pound LB is coming downhill less concerning.

4) Bump up the play action

The play action passing game is absolutely lethal with our personnel. We've got a big, fast, nasty fullback who can catch reliably, a cadre of quick running backs who can catch the ball, and a group of wide receivers who, though many are inexperienced, bring a broad variety of skills and abilities.

Teams from high school to the NFL have proven that you don't have to run the ball exceptionally well to set up play action. You just have to commit to running and have some success at it. We can definitely achieve that. Particularly with Trey Metoyer and Justin Brown coming into play. Justin Brown gives us a legit deep threat who isn't as easily pushed around as Stills. Metoyer just catches everything, and I've never seen an OU WR so adept at high-pointing the ball.

Those are my takes. What say you?