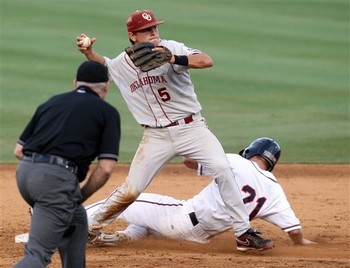 Senior short stop Caleb Bushyhead will have a mostly new supporting cast in the infield in 2012.

In 2011 Oklahoma had 11 players selected in the Major League Baseball draft. That was the second most in the nation and the most among Big XII schools. Its also the reason why the majority of fans were disappointed that the Sooners didn't make it back to Omaha for their second consecutive appearance in the College World Series.

Oklahoma's trip to the Fort Worth Regional was their fourth consecutive post season appearance and with a Top 15 ranking in the preseason they are ready to make a push to run the streak to five consecutive. However, it will be a largely new cast leading the way in 2012, particularly in the infield.

Caleb Bushyhead - Missed the start of last season while recovering from a knee injury suffered in fall practice. Make an immediate impact from the plate once inserted back into the starting lineup by batting .340 in conference play and .455 in the Big XII Tournament. As one of the few senior infielders he will lead Oklahoma defensively from the short stop position where he'll be an all-conference candidate.

Jack Mayfield - May be Oklahoma's best all around player. In 2011 he started games at shortstop, second base, DH and also made several appearances on the mound. He hit .259 from the plate with 10 RBIs while also collecting a 3.68 ERA in and 3 saves in 22 innings pitched.

Evan Mistich - Batted .316 in 2011 while making 44 starts between DH and second base. Knocked in 16 RBIs and was a Big XII honorable mention.

Jake Smith - Appeared in two games last season as a pinch hitter. Went 1-4 from the plate with the hit being a three-run home run.

Tanner Toal - Starter four games last season and appeared in a total of 22. He is the other top candidate to win the vacant catcher position. Hit .318 in 2011 with 6 RBI.

Garrett Carey - Has a chance to earn a starting spot in the infield. In 2011 he hit .273 with 31 RBIs at McLennan Community College in Waco, Texas.

Dusty Dishman - A two-year letterman at Temple College in Temple, Texas. Dishman hit .379 last season with 33 RBIs while helping to lead his team to the conference championship.

Dylan Neal - The odds on favorite right now to win the starting spot at catcher. Neal hit .309 with 13 RBIs at Blinn Junior College in Brenham, TX.

Matt Oberste - Was a 2011 JUCO All-American at Connors State College in Warner, OK after batting .418 with 17 homers and 67 RBIs. Will be a leading candidate to grab a starting position in the infield.

Hunter Lockwood - Was a four-year letterman at L.D. Bell High School in Bedford, Texas. Was named All-Area and All-State his senior year after batting .485 with 19 home runs and 55 RBIs. Lockwood will definitely have a chance to play as a freshman because of his offensive numbers but also add on the fact that he's a catcher and the Sooners currently have that position vacant.

Drake Roberts - Was a 2011 High School All-American at Brenham High School in Washington, TX. During his senior year he hit .375 with 35 RBIs and recorded 33 stolen bases.