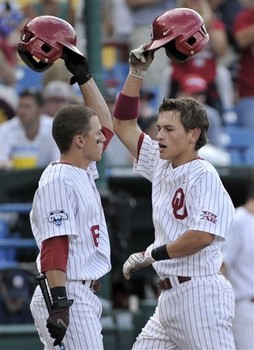 Sooners Win Game One, 4-3 - Oklahoma fell into a hole early when the Wave scored runs in the first and second innings to take a 2-0 lead. The Sooners pulled out a two-out rally in the fourth boosted by freshman Hunter Lockwood who recorded a hit, an RBI and crossed the plate for the game tying run. The Sooners took the lead in the fifth when Max White drove in Erik Ross. Pepperdine tied the game at 3-3 in the bottom half of the inning but the Sooners struck again in the sixth for the go ahead run. Sophomore Matt Oberste hit a two-out double in the sixth and was then driven in by Garrett Carey for the game clinching run.

Starting pitcher Dillon Overton pitched 4.2 innings and allowed 7 hits from the 24 batters he faced. All three of Pepperdine's runs came against Overton but he also recorded five strikeouts. Jordan John came in as the middle reliever and held the Wave scoreless over 3.1 innings. He faced 11 batters and fanned three of them. Damien Magnifico, who has already reach a cult like status, came in as the closer and recorded the save after facing four batters in the 9th. He gave up one hit and recorded one strikeout on pitches that clocked more than 100mph.

Game two of Oklahoma's weekend series is set for a 3:00 (CST) start on Saturday afternoon.

Sooners Blown Out In Game Two, 10-0 - Oklahoma couldn't get any offense going against Pepperdine pitchers in game two and Sooner pitchers were shellacked to the tune of 10 runs on 14 hits. Starter Jonathan Gray only lasted 2.2 innings and gave up 1 run on two hits. Meanwhile OU batters were unable to move anyone across the plate on Pepperdine starter Scott Frazier who lasted seven innings and gave up 5 hits.

Left fielder Evan Mistich reached base three times today in three appearances at the plate. He hit twice and reached on a walk but that was pretty much it for the Oklahoma offense.

First pitch in Sunday's rubber match is slated for 1:00 (CST).