Share All sharing options for: OU Football - Full 2012 Schedule Set (With A Twist) 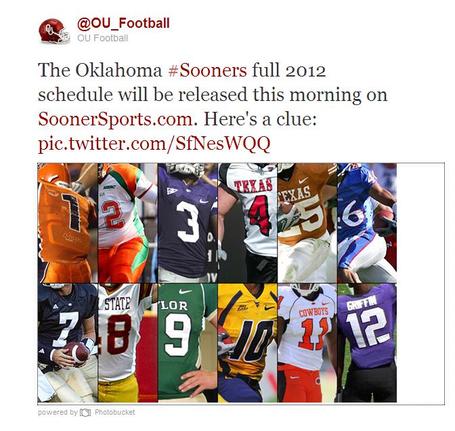 So the folks over at OU decided to get a little clever this morning and release the tweet above with the attached picture as a "teaser" to the official release later this morning revealing the Sooners full 2012 football schedule. With the release of the conference schedule on Tuesday, the only OU games in question were the two remaining vacant non-con slots that had yet to be filled.

Well, as you can tell (or as we're about to tell you) from the picture it would appear the rumors of recents days will be proven true.

While it's somewhat difficult to make out, the helmet of the player in the first picture appears to end in 'EP' which would make sense given the talk that the Sooners were working on a deal with UTEP for the season opener.

The second picture is pretty easily identifiable as Florida A&M which would take all of about five seconds to determine thanks to the magic of a Google image search.

The rest are all obvious as well as already known.

So there you have it. The suspense was pretty much removed several days ago, but when the schedule is officially released in the coming hours this will all very likely be confirmed.