Seeking some insight to Oklahoma's upcoming Cotton Bowl opponent, we break down the game film from the Aggies game against LSU.

This is the second of our three part 'Know Thy Enemy' series as we prepare to face Texas A&M in the 2013 Cotton Bowl. If you haven't already, you can read part one here where we broke down A&M's game against Florida. Unlike in that one, where it was somewhat difficult to truly glean much seeing as it was the Aggies first game of the season, this LSU game was their seventh of the season. As such, this should be a much better representation of who A&M is as a team this year.

This was another game Texas A&M lost and another game in which Johnny Manziel really didn't play that well. In fact, this was the only game all season in which Manziel did not score a touchdown. The Aggies started the game pretty well, taking a 12-0 lead, but LSU made the adjustments on defense and bottled up the future Heisman winner. A&M would score a late touchdown to make the 24-19 final score look better than it actually was.

Even though, much like with the Florida game, Oklahoma's front seven isn't on the same level as that of LSU, it will be interesting to watch what they had success with against Manziel. Also much like the Florida game, it will be difficult to evaluate much with respect to A&M's defense given how inept LSU's offense was this season. In addition, the one thing they do well, the power run game, Oklahoma has struggled with all year.

So, once again yet another ringing endorsement on my part to entice you into reading any further. Ever the salesman I suppose. Anyway, let's get into this.

* A&M starts the game on offense and does what I think we can certainly expect to see in Arlington, spreads LSU out with four and five wide sets. LSU responds with a 4-2-5 defensive set, something I think we're also very likely to see from Oklahoma as well.

* Kind of interesting on this opening drive that A&M isn't really going with their hurry up. Actually, it's very reminiscent of what OU does with their "hurry up and wait" offense, where they don't huddle and check with the sideline for the play.

* Interesting use of the pistol formation from A&M down inside the LSU five yard line. Puts the running back really deep, but it works as Christine Michael punches it in.

* As good as Damontre Moore is, Oklahoma really hasn't had any problems with pass protection this season. Even against the better pass rushers that they have faced. Moore will certainly present a challenge, but there is no reason to believe OU's offensive line cannot match up. Another one to negate him is to run the ball right at him, which is hopefully something we'll see Josh Heupel and his offense do.

* Have to give Manziel credit, he's not a big guy but he can take a hit. Rarely are they ever clean shots, but you don't run the ball as much as he has this season and not take a punishment. Took a pretty decent shot here on their second possession and he popped right back up.

* Bit of a Captain Obvious point to make, but tackling is going to be huge in this game for Oklahoma. Whether it's Manziel, Ryan Swope, Ben Malena, Mike Evans, or whoever, the first man there needs to bring them down or do a good enough job to hold them up until reinforcements arrive. Minimizing yards after contact and/or catch will play a significant role in this game.

* Will also be VERY important that this OU secondary doesn't get caught looking into the backfield, which will be very tempting given all that Manziel can do. The last thing this defense will need in this game is to get sucked up on a play only to have A&M burn them over the top for a big play/s.

* LSU is being very creative with who/when they bring the blitz. They've mixed in both three and four man defensive lines and brought multiple linebackers at different times. It hasn't resulted in any sacks, but it has made Manziel noticeably uncomfortable.

* Mike Evans is a freak. He just physically abuses corners, even being an Aggie, he's really fun to watch. 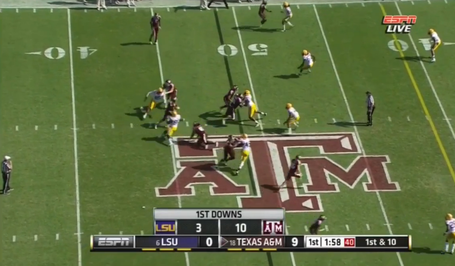 * This picture above is one of the things that makes Manziel so dangerous. You can see a pocket that has completely collapsed and what would appear to be an impending sack. Instead, Manziel is able to elude both defenders and turn what could have been a five yard loss into a four yard gain.

* Mike Stoops is going to have to be aggressive with the blitz in this game. Playing passive, as he's done at times against this kind of quarterback, is a guaranteed way to fail in my opinion. If you're aggressive and you get beat that's one thing, but if you're passive and still get beat it's another thing entirely. I'd much prefer the former to the latter any time. Obviously Manziel makes a ton of plays on the run, but those are also the situations where he tends to take chances he shouldn't with the ball.

* Cannot begin to stress how important OU's defensive tackles are going to be in this game. (1) Because A&M has a pair of future NFL offensive tackles going against OU defensive ends who have had trouble generating a pass rush all season. (2) Because the quarterback draw has been a fixture of this A&M offense all season and if OU is getting pushed around up front Manziel will have a field day.

* Something I've learned in watching these two games. If you're within five yards of an A&M receiver, if the ball is thrown their direction, and they do not make the catch they will immediately begin to gesture wildly for a pass interference call.

* You can attack this A&M defense on the edge, so expect Heupel to call every run play between the tackles.

* Not nearly as much stunting up front from the A&M defensive line so far in this game, but they've still done it at times mainly on third downs and obvious passing situations.

* At least through the first half, more of the same from Manziel with respect to what they're asking him to do with his arm. Mainly those easy, short, quick throws.

* I'll tell you this much...It is not encouraging to watch Manziel run around and make this LSU front seven look silly. The kid is a bonafide escape artist, you can't help but be impressed.

* Okay, to be fair Manziel's second interception was 100% on Evans. Manziel hit him in stride and right in the numbers on a slant that Evans had bounced off him up into the air and into the waiting arms of an LSU defender.

* Nothing in this game has changed my opinion on Manziel as a pocket passer. As we said in the Florida game, it's obviously much easier said than done to keep him contained to the pocket but if you can he becomes very average.

* As much as Manziel (obviously) and Evans stand out on this Aggies offense, I really think Ryan Swope could be the difference in the OU game. Assuming OU chooses to cover him with their nickel back, which I think is fair to expect, that match-up will go a long way towards whether or not A&M has success moving the ball through the air. If he (Swope) has a big game, I'd expect OU to be in big trouble.

* LSU is just gashing this Texas A&M defense on the ground here in the fourth quarter. They're definitely vulnerable up the middle from what I've seen. With that in mind, I think Trey Millard could abuse this team. However, I won't hold my breath that Heupel has that same thought in mind when he designs his game plan.

* As bad as Oklahoma is on putting kickoffs into the end zone, remember the name Trey Williams. Could be a factor in this game for A&M on kickoff returns. He was a very highly rated running back recruit and he has elite speed.

* To my point that Manziel takes unnecessary chances with the ball, he almost just threw another interception as he was scrambling away from a sack because the tried to throw the ball away with his left hand.

* Manziel getting the ball back here on his own twenty, with just under five minutes to go, and down five. Takes a really bad sack on first down for a six yard loss, rolled right into it. Takes another chance on second down throwing into double coverage, but gets bailed out by a late flag for a hit on a defenseless receiver.

Once again making my point, Manziel throws his third interception trying to make a throw back across his body. Big spot for a redshirt freshman and he presses a little too hard trying to make a big play. There will almost certainly be opportunities for this Oklahoma secondary to pick him off, it's just going to be a matter of whether or not they capitalize on them.

* On the very next play, LSU houses it which was essentially the knockout blow in this game. Only further emphasizing how big that last Manziel turnover proved to be.

Certainly interesting to see Manziel fail to step up in the fourth quarter here when his team really needed him to do so. We know now of course he'd go on to beat Alabama on their own field in three weeks, but this was a big game at home and he failed to step up. If Oklahoma can play with a lead in this game maybe they can force Manziel to take even more chances with the ball than he normally does.

I definitely thought this game was more helpful than the Florida one, which only increases my anticipation for the Bama game. Just like last time, get at me in the comments with your thoughts and/or anything you want to focus on for the Alabama game.