The most pivotal match-up in Saturday night's Oklahoma/Notre Dame game is Blake Bell vs. the Irish defense.

Share All sharing options for: An Unstoppable Force Meets An Immovable Object - Blake Bell vs. The Notre Dame Defense

Notre Dame's defense is good. They're really good! The Irish are second in the nation in scoring defense (9.4 ppg) and, most notably, have not allowed a rushing touchdown in their seven games this season. On the other side of the ball is a Sooner offense that ranks fifth in the nation in scoring offense, boosted by quarterback Blake Bell who has scored a team high eight rushing touchdowns. Without question, this is the marquee match-up of this game and clearly something is going to have to give.

Statistically, the Irish are giving up 3.4 yards per carry to their opponents but inside the Red Zone they have been stellar. The Sooners are averaging 5.9 per carry on the season and have scored a total of 20 rushing touchdowns with Bell accounting for almost half of them. The advantages in this match-up fall in two categories, statistics and schemes.

Of Notre Dame's seven opponents only two of them are ranked ahead of Oklahoma and five of them are much worse than that what the Sooners are putting on the field. Navy averaged 3.7 yards per carry against the Irish and Michigan 3.9.

That's not a really impressive resume but regardless the feat of seven consecutive games without allowing a rushing touchdown is impressive. That brings us to the schemes. What can Oklahoma do that Notre Dame's opponents have not been able to. 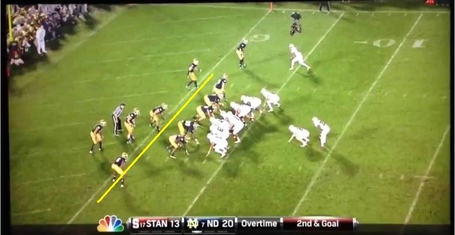 Stanford probably came the closest to scoring a rushing touchdown on Notre Dame two weeks ago. The Cardinal try an I-formation at first but look at how close the second layer of the Irish defense is able to get to the line of scrimmage. The reason is because the fullback and tailback are directly behind the quarterback which draws the linebackers in and the only receiving threats are a tight end and receiver which are covered by a safety and a corne corner at the top 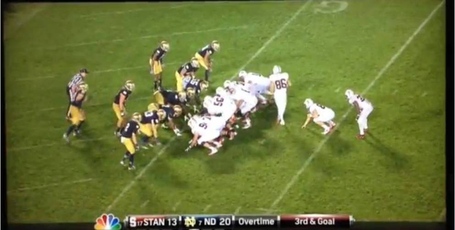 On the next play the Cardinal packed it in tight and put a man in motion. Look again at how close the Irish linebackers and safeties are to the line of scrimmage. This formation becomes a numbers game that favors the defense. In order to score here, you have to straight up overpower the defenders in front of you with your blockers occupying more than one defender. What Oklahoma is doing is flipping it around and making it a numbers game that's advantageous to them. 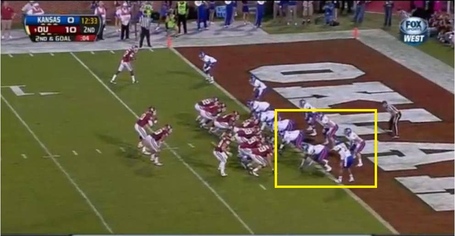 By overloading the right side of the ball the Sooners create a mismatch against the defense. Oklahoma doesn't care about anyone to the left of the center. Their focus is the five defenders in the box above, and counting Bell, they will have a 7-on-5 advantage with this play.

Oklahoma completely seals off the five defenders to the right side and at this moment the only one with a chance of stopping the play is the circled defender and unfortunately for him Trey Millard has already locked in and is coming at full speed.

Millard delivers a crushing block that absolutely levels the defender and leaves Bell with a wide open lane to head into the end zone untouched.
Notre Dame hasn't faced a scheme like this and Oklahoma runs it to near perfection. You can't overload to the side of the extra tight ends or fullback because it leaves you vulnerable on the opposite side. On the same hand, if you try to play it straight up, you're going to need a defender who can fight through two blockers to get to the play. Either way you play it, its an advantage to Oklahoma. 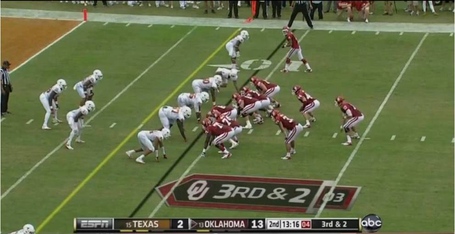 There are multiple formations that Oklahoma runs the "Belldozer" package out of. With the Diamond formation here, the Sooners have two receivers, one on each side of the field, and the fullbacks are lined up in front of Bell. Look at how far back the Texas linebackers are from the line of scrimmage. The have to be there in order to account for the fullbacks and to take the slants away from the receivers. This essentially left OU with a 5-on-3 to get the two yards needed for a first down and the result was a nine yard gain.

On the next play Texas basically surrendered the touchdown. This formation is basically the same as the example we used from the Kansas game but the linebackers are still so deep that they've removed themselves from the play before the ball is even snapped. Talk about a walk in the park!

I'm sure that Notre Dame is going to have a scheme to combat the "Belldozer" but will it work and if it does, what kind of adjustments will the Sooners make for it? This is going to be a great game-within-the-game match and will very likely determine the outcome. It truly is the unstoppable force vs. the immovable object.