The University of Oklahoma is asking OU fans to 'Stripe The Stadium' for Saturday night's game.

Earlier on Monday, there was talk of a potential white out on the part of the fans. The talk originated from a couple players and began to spread like wildfire.

To say the reaction from most of the OU fans I saw online was mixed would be an understatement. Many did not seem to be in favor of the idea despite the request coming from the players.

Shortly after word began to spread, the OU administration said a white would not be the plan but that they had an idea and would release details later in the day. We now have those details.

They are asking OU fans to 'Stripe The Stadium' Saturday night against Notre Dame. This is similar to what West Virginia did for a home game earlier in the year and as someone who was watching at home on television, I found it to be incredibly cool.

Anyway, here is a picture of the stadium provided by SoonerSports.com showing you what color you need to wear based on the corresponding section you'll be sitting in. Pretty cool idea in my opinion, so check it out. 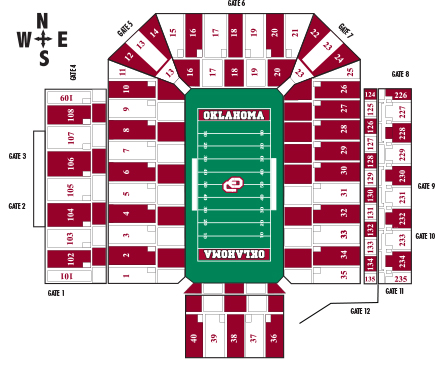