The quarterback is the most prestigious position on the football field. It is also the most criticized position and for quarterback like Landry, Jones who is sometimes hot and sometimes cold, the criticism can be downright brutal. Three weeks ago Jones committed two costly turnovers in Oklahoma's 24-19 loss to Kansas State. We spent the next two weeks discussing Jones and all that went wrong on that night. The consensus among many Oklahoma football fans was that the season is a wash and Jones is a bust who should have left for the NFL when he had the chance.

However, Jones rebounded after, the bye week, to produce his most well-rounded game of the 2012 season last Saturday in Lubbock, Texas. In Oklahoma's 41-20 win over Texas Tech he completed 62.5% of his passes for 259 yards, with two touchdowns and no turnovers. That's the Landry Jones that the Sooners need to lead them onto the field this coming Saturday morning.

Texas is going to bring pressure because Jones has shown a tendency to get rattled under pressure. This puts more emphasis on the success of Oklahoma's rushing attack to keep the Longhorns balanced, but it also puts a large amount of emphasis on Jones responding in the same manner that he did against Tech last Saturday. 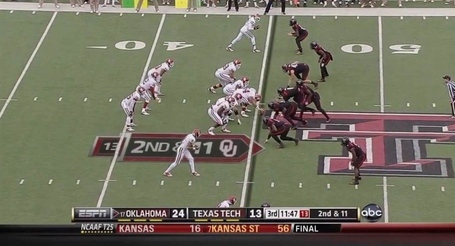 While the entire body of work was impressive for Jones last Saturday, I believe this play best shows the areas in which he improved from the Kansas State game. Facing second and long, Oklahoma is in a passing situation with three receivers and two backs. The Red Raider defense is showing blitz so Jones knows there will be pressure on this play. In his pre-snap read he should be looking for the "hot" receiver, which is the guy in one-on-one coverage. That guy should be Trey Metoyer at the top or possibly Kenny Stills in the slot but Metoyer is against press coverage and Stills has a safety playing over top. This means that Jones is going to have to buy some time for the play to develop. 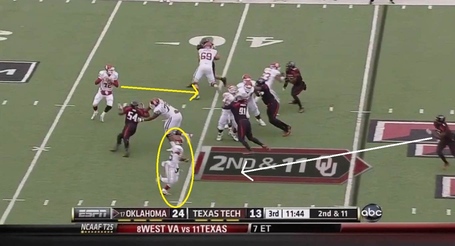 Pressure comes off the edge, to Jones'right, making running back Damien Williams the safety valve/hot read. However, Jones cannot release the ball right now because a defender has a bead on Williams. Jones has three options here: 1) Force a throw and hope something good happens. 2) Try to scramble and move the pocket. 3) Step up into the pocket and buy some time. In a show of maturation and poise, He chooses the latter. 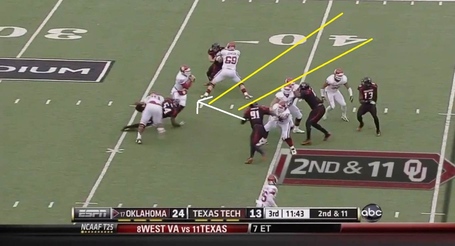 Jones is nearly sacked as he steps forward into the pocket, and with more pressure coming from his right it must've been awfully tempting for him to take the lane that opened up to his left. Notice where Williams is at the bottom of the screen, still not deep enough into the flat to turn this into a positive gain. Also note that defense end Kerry Hyder (#91) is going to blast Jones when he makes the throw. 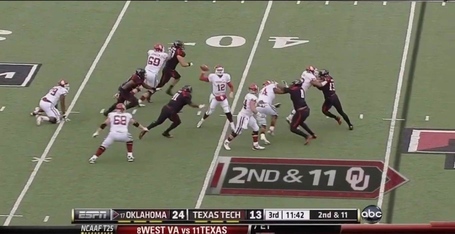 Compare this photo to the one above and see how much stepping up four yards into the pocket takes away the angle from Hyder and allows Jones to square his shoulders and make to throw. 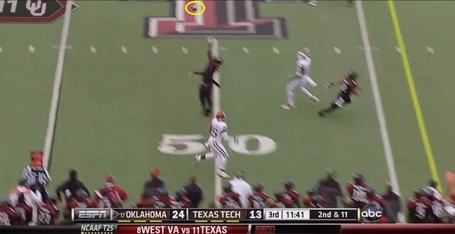 If we're going to highlight this play then we have to highlight just how good of the throw Jones makes in the face of pressure. You can see where the ball is here. He places it just out of reach of the defender and right into Williams' hands. 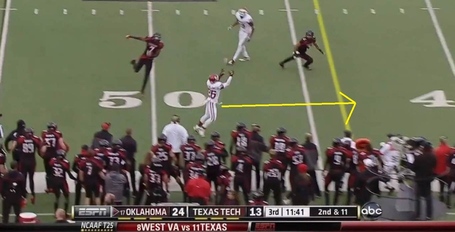 Williams makes the catch and has nothing but sideline and empty space in front of him. The result of the play is a 38 yard gain that moves the ball from Oklahoma's 45 to the Tech 17. Four plays later the Sooners will score a touchdown to take a 31-13 lead and put the Red Raiders with their backs against the wall.