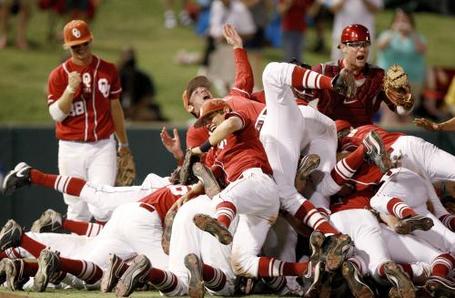 The dynamic of Oklahoma's baseball team will be extremely different from the past two year's and that may be a good thing. After making a trip to Omaha in 2010 the Sooners struggled for various reasons in 2011 and ended up getting bounced from the NCAA Tournament well short of the CWS. Now some fresh faces will appear in the lineup to try and send the Sooners back to the promised land.

The Sooners have three solid starters in the outfield with a load of experience (2 SRs, 1 JR) but experience and depth both become an issue once you get to the bench.

Cody Reine - Started 35 of Oklahoma's 60 games last season with 34 of them being in right field. Reine saw his batting average drop to .256 last year from .340 in 2010 which may make him a candidate to be in a position battle this spring before conference play starts. I would go ahead and pencil him in as the starter in right field but Oklahoma needs him to find his mojo from behind the plate because he may have the biggest bat on the team.

Erik Ross - Played in 48 games last season with starts in 37 of those games. He hit .315 for the season with with 21 RBI. Is incredibly dangerous once he gets on base and recorded 19 steals in 27 attempts last season.

Max White - Had a total of 38 starts last year with 29 of them being in the outfield (he also spent some time at second base and had one start as the DH). Batted .286 in 2011 with 20 RBI. White has the talent to play both the infield and outfield but with the lack of depth in the outfield he may end up just being an outfielder in 2012.

Brian Brightwell - Lettered all four years at Putnam City High School and was All-State and All-City last year as a senior. During his senior year he hit .389 and knocked in 22 runs. He is a player who could play both the infield and outfield for the Sooners and could be ready to make appearances in mid-week games as a true freshman.

Dylan Raper - Lettered all four years at Glenpool and was a three time All-Conference selection and two time All-Metro selection. His senior year he hit .525 with 40 runs batted in and 44 stolen bases. Possibly the most polished of all the freshmen when it comes to offense.