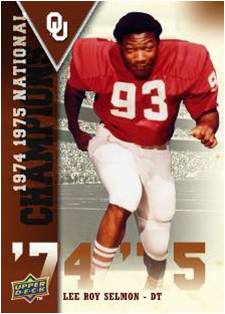 After chasing down rumors and gathering information all weekend, regrettably we can confirm that Sooner great Lee Roy Selmon has passed away. After suffering a stroke on Friday Selmon passed away on Sunday afternoon.

Part of probably the most famous set of brothers in OU history, Lee Roy Selmon and his brothers gave Oklahoma one of the greatest defenses in history. Selmon was named a consensus All-American in 1975 and also in 1974 by Newspaper Enterprise Association.

After one of the greatest careers in college football history, Selmon was the first player taken in the 1976 draft by the Tampa Bay Buccaneers. He was inducted into the National Football Foundation Hall of Fame in 1988.

It is with very heavy hearts that the Selmon Family announces the passing of our beloved husband, father and brother, Lee Roy Selmon.  Lee Roy passed away today surrounded by family and friends at St. Joseph's Hospital.

For all his accomplishments on and off the field, to us Lee Roy was the rock of our family. This has been a sudden and shocking event and we are devastated by this unexpected loss. We deeply appreciate the prayers and support shown by family, friends, the football community and the public over the past two days.

For those wishing to honor Lee Roy's many contributions, we ask that donations be made to Abe Brown Ministries or the University of South Florida Foundation Partnership for Athletics.

We ask now for privacy at this very sad time and will not be making any further statements until funeral arrangements are announced at a later time.