Stop Cramping My Style! Faking A Cramp Seems To Be The Top Response To The Hurry Up Offense

Share All sharing options for: Stop Cramping My Style! Faking A Cramp Seems To Be The Top Response To The Hurry Up Offense

The world of college football is quickly evolving to the fast-paced hurry up offense that is designed to catch defenses off guard and out of position. If you can catch a personnel mismatch then you just hurry up to the line of scrimmage and run the next play before the defense has the opportunity to sub or make adjustments. With many teams getting caught with substitution infractions (looking at you Texas A&M) the only realistic options are to man up or cramp up (again we're looking your way, A&M).

If you're an opposing defensive coordinator then you can try and mimic the hurry up offense with your scout team but it very seldom works. You are only given time by the officials to make substitutions if the offense subs and anything beyond that you would risk having too many players on the field...or in some instances not enough. With more and more offenses taking on this approach the defenses are struggling to keep up.

Last year when the Sooners lost to Texas A&M in College Station the accusations by Oklahoma fans that the Aggies were faking cramps to slow down the offense were written off as sour grapes. However, after Saturday's loss to Oklahoma State there is no doubt that "cramping" is a key play in the Aggie defensive playbook. Need some evidence? 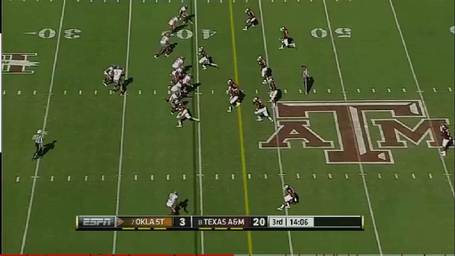 This is either a new defensive formation in which the defensive tackles play back around the first down line and the linebackers even deeper than that or the Aggies just weren't ready for the play. While playing that far back would allow your defense to really attack down hill a two-man rush doesn't seem very effective. Clearly Texas A&M wasn't prepared for the ball to be snapped when it was because they couldn't get their defensive signals in before hand. This is what the hurry up offense does. And the response? 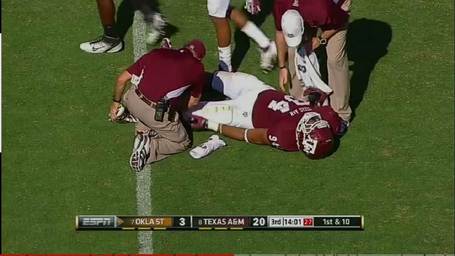 Immediately following the above play we have an Aggie down with a cramp. Notice the time on the clock, we're only a minute into the second half. This is either a ploy to slow down the offense to get the calls in and to make defensive personnel changes or quite possibly one of the worst conditioned athletes in all of college football.

Had this happened only once on Saturday we could have written it off an coincidence and circumstance but the fact that it happened repeatedly throughout the second half shows that it was nothing more than a ploy. Its a ploy that blew up in their faces as Texas A&M snatched defeat from the jaws of victory by blowing a three-score second half lead but it also left OSU Head Coach Mike Gundy saying things like this afterwords.

College offenses will continue to evolve and defenses have to find a way to catch up. However, throwing ploys out like the intentional cramp only prove to show one thing. The defense is at its last resort and clearly under-prepared.