Landry Jones threw 48 passes Saturday night against Missouri. He completed 73% of those passes for 448 yards and three touchdowns. It was the most yards passed by a Big 12 quarterback over the weekend and yet with all of that success there are two specific passes that Oklahoma fans can't get out of their minds. Those were the passes that went to the other team.

Of course we'll never really know what was going through the mind of Landry Jones or his receivers. Honestly that cripples us a bit in evaluation and since we're not in the film room to ask, "What's going on with this play?" we're left only to speculate if it was a bad decision by Jones or if he was victim of good defense. Let's take a look.

Trailing 7-0, the Sooners were moving the ball on their second offensive possession and had just entered into Missouri territory. In an attempt to stretch the field, Jones throws deep to Dejuan Miller only to have it intercepted by Tiger safety Kenji Jackson. Bad decision or good defense? 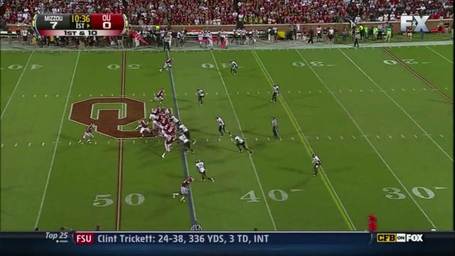 On the play just prior to this one Dominique Whaley had ran the ball from the Oklahoma 25 to the Missouri 45. That naturally sets up a play-action pass for the next play. You can see from this photo that the linebackers are "frozen" with the play-action and the bottom corner is coming on a blitz. The way I assume Landry is reading this is that he's got single coverage across the board on all three receivers. Miller is at the bottom of the screen and will be picked up by the safety, at the top he's got single coverage with a corner and the "assumption" is that the top safety will pick up the slot. Now, it should be noted that the quarterback's back is turned to the defense so he's not reading anything right now. 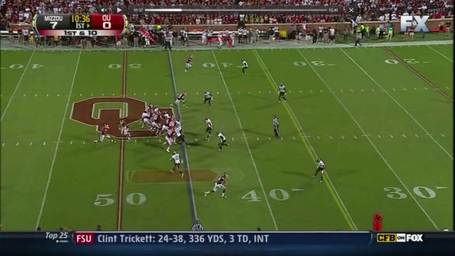 Here you can see that the two bottom side linebackers are playing the run but the top backer is clearly playing coverage leaving Kenji Jackson (top side safety) free to roam and read the quarterback. Jones still has his back to the defense carrying out the play-action. 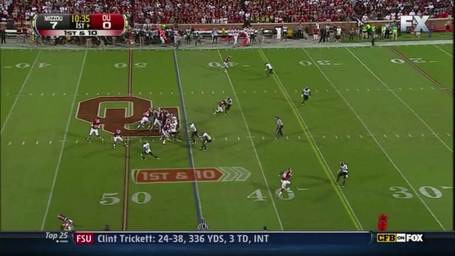 Now that Jones has carried out the play-fake he sets up and sees a corner in really good position up top, tight linebacker coverage on the slot in the middle and Miller having an inside step at the bottom. He locks in on Miller and I really don't think he sees Jackson roaming. 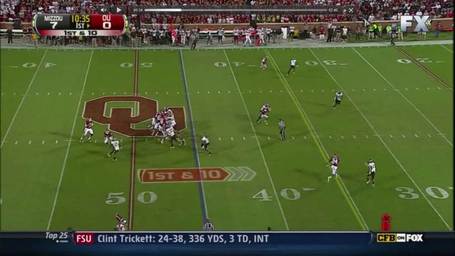 This is when the ball should have been thrown. Miller is the only option here because he has an inside step on single coverage. The safety is still in the middle of the field so if the ball is thrown here we're looking at a first down. However, Jones is looking up to as he goes through his progressions. 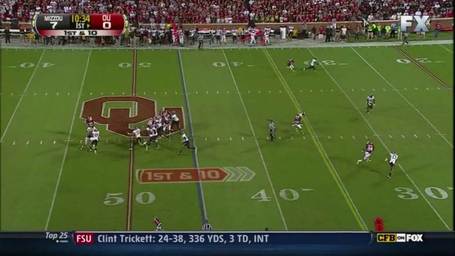 Here's where things start to go south. The blitzing corner is getting pressure, Jones is locked in on Miller and committed to the pass but notice two things here. First, compare Miller's shoulders and angle to the previous photo. He's turned a post route into a go route, thus giving up his inside position and allowing time for the free safety to get in position because the play will go deeper. Secondly, look at the top of the screen. There we see a receiver breaking free for what would be a first down. Too late now though because he's in his throwing motion and the ball is going to Miller. For this pass to be completed to Miller it has to be in his hands right now. This is a classic example of when we talk about a receiver breaking his route. 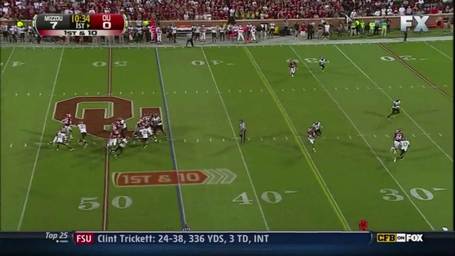 The ball is away now and you'll notice that there are two open receivers on the underneath route and Miller now has double coverage over the top. This is a pass that never should have been thrown. Clearly a bad decision. 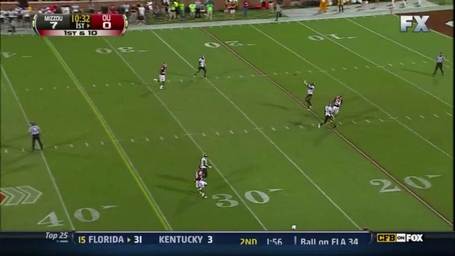 The result of the play was Jackson's interception but keep in mind how fast this play developed and how quickly the decision had to be made. Clearly it was a bad decision by Landry Jones but one that could be corrected if he either pulled the trigger a bit Sooner or had the patience and protection to recognize what was open underneath. Regardless, this one is on Jones.

Leading 24-14, Jones and the Sooners are once again in Missouri territory and have the opportunity to put the game out of reach but once again the ball ends up in Missouri's hands, this time its linebacker Luke Lambert making the play. 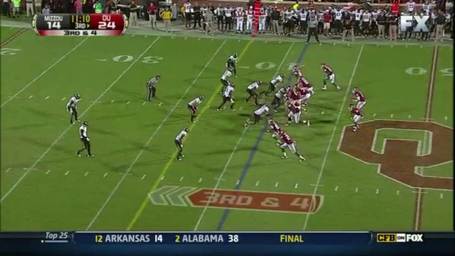 This time at the snap there is no play-action and Jones is reading the defense. The Tigers are showing blitz in the middle and zone coverage. 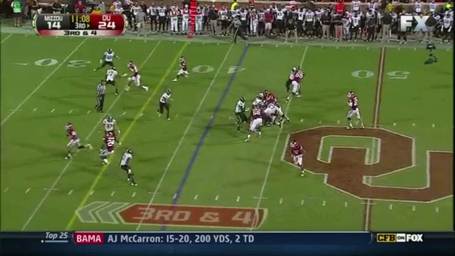 I initially thought (and incorrectly stated on Sooner Nation Sunday night) that I thought Jones was trying to go to his "hot" read or safety valve on this play in the face of the blitz. While he has a hot read on this play (running back flaring out to the bottom) that's not were Jones is looking. However, he's not looking at Dejuan Miller either. Oklahoma attacks the zone with four receivers, two at the top and two at the bottom, and look who they lose track of. Just to the left of Miller is Ryan Broyles running free. That, ladies and gentlemen is who this pass was intended for. So what happened? Here's a hint, look at Brad Madison (#57) coming through the line.

(Sorry CC, this is jtesooner and I'm not trying to hijack your post.  But on the actual broadcast, they showed this from a different angle and I believe it helps my "Landry panicked" argument and disproves your Broyles was the intended receiver on this.  Or at a minimum that he wasn't open and this was still a terrible decision.  IMO, he panicked because he was about to get hit and has just failed to grasp the concept that taking a sack isn't always the worst thing.)

(Ok, back to your post.  Sorry for the interruption.) 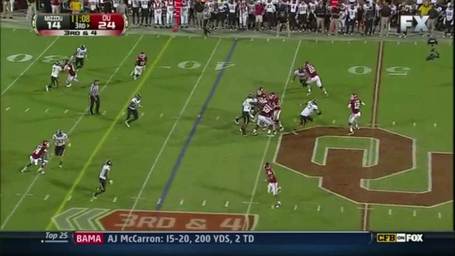 Setting up to throw Jones has three options here. The first option is at the top of the screen where he could possibly throw for a first down. The second option is the back who is the safety valve and the third option is Broyles who is off screen. Jones is locked in on Broyles but Madison is also locked in on Jones. 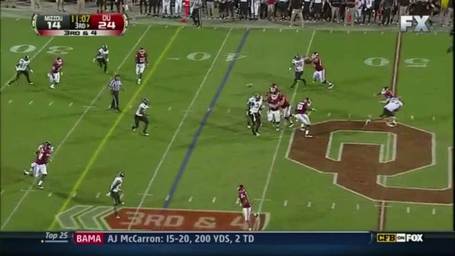 Hit on the throw, Jones doesn't get enough air under the ball to clear linebacker Zaviar Gooden who is about to tip the ball and place it up for grabs. Under normal circumstances (by that I mean not getting blasted when you throw the ball) there is a really good passing lane here for Jones. 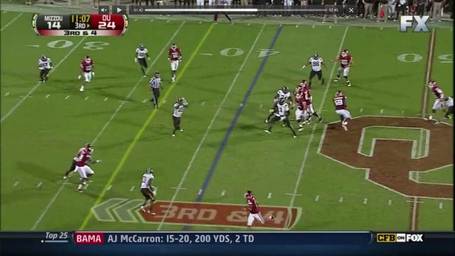 Gooden has a chance to make the pick himself but by tipping the ball up in the air he puts more Missouri defenders in position to get the ball than there are Oklahoma receivers. 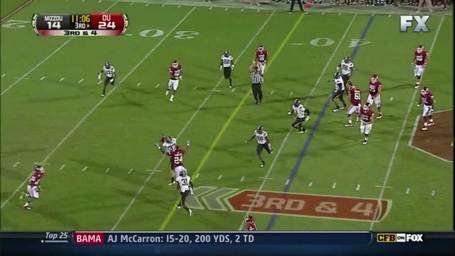 Lambert makes the pick, Miller looks like he's going to give him a big hug and on the bottom left of the screen we see Broyles come back into the play.

This play was there and had Oklahoma been able to properly execute it the result would have been a huge gain for the Sooners. As it turned out with was a good play for the Missouri defense .