Debunking The Florida State Game Myths Part I: "The Points That Were Robbed"

Share All sharing options for: Debunking The Florida State Game Myths Part I: "The Points That Were Robbed"

Yes, I do realize that we're at Wednesday of the Missouri game week and we're still talking Florida State but come on, it was a huge game and unless A&M or Oklahoma State runs the table until they play Oklahoma then its the biggest game the Sooners will play this season absent a BCS championship game. For that reason alone we've got to talk about it just a little while longer.

When you lose a nationally televised game on your home field by just ten points its only natural to go back and speculate where those points could have been made up and the tide of the game turned. Of course you look at the times in which your team shot themselves in the foot with drive killers like six sacks and three interceptions. Then there are those fans who travel down the, "we were robbed by the refs!" road and thus the myths about the game were born. The truth is, no one was robbed of anything and here's the evidence to prove it. 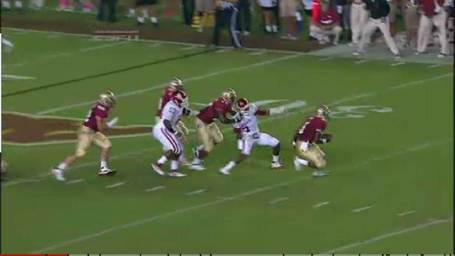 Myth #1 - A bogus holding call robbed FSU of their first touchdown. At the 4:06 mark of the first quarter EJ Manuel seemed to have tied up the game when he hit Kenny Shaw on a 23-yard touchdown pass. Laundry hit the field and the Seminoles were called for holding thus eliminating the score. Florida State would eventually kick a field goal to draw to within 7-3. While some of the Seminole fans that have posted here on CCM would have you to believe it was a phantom call the photographic evidence doesn't lie. Right tackle Zebrie Sanders clearly is holding Oklahoma's blitzing linebacker Corey Nelson. 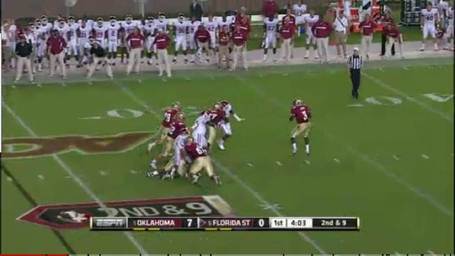 Although the side referee was on top of the play and threw the flag immediately upon Sanders undressing of Nelson the bone of contention among some FSU fans is that #52 was called out for the infraction. That's the center Bryan Stork. He's in the middle of the picture above with his hand on Casey Walker's back. Walker blew off the ball and ran right past Stork with ease. You think Stork's hand is there on Walker's back because he's patting him there and saying, "Good job! You really got a jump on me there buddy"? Nope! He's HOLDING!!!!!!!! 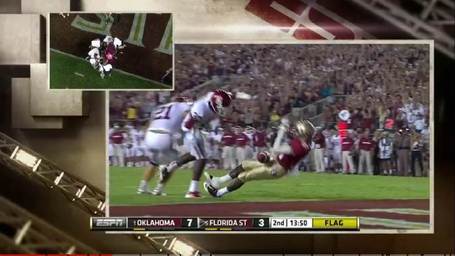 Myth #2 - A nasty hit on Kenny Shaw cost Florida State a touchdown when he clearly made a catch close to the goal line. Well, he clearly didn't make the catch because as the photo above shows he's not in possession of the ball when he hits the ground. Had he "clearly" caught the ball there would be no debate here. Perhaps he did make the catch and perhaps he didn't but the play doesn't end when the penalty occurs, it ends when the ball is dead. On this play that moment was either when the pass was incomplete or when the fumble was recovered by Oklahoma in the end zone.

In the photo you see two things. First, Shaw has not yet crossed the goal line. Second, he does not have possession of the ball. The debate here is not the nature of the hit (we'll get into that on part II of debunking the myths) but rather where the ball should have been spotted. Its my belief that Shaw is unconscious at this part of the play but unfortunately for FSU the play doesn't stop when a player loses consciousness. That's the ball sitting there on Shaw's lap area before he's down so this is either an incomplete pass or a catch and a fumble, in which the Sooners recover. Either way FSU doesn't get the ball at the goal line and once again no one was robbed of anything. Two plays later Sooner linebacker Tom Wort read the screen pass and ended Florida State's scoring threat with an interception.

Both of these plays make for good "water cooler" talk but at the end of the day calling them anything more than what they actually were is nothing more than creating a myth.